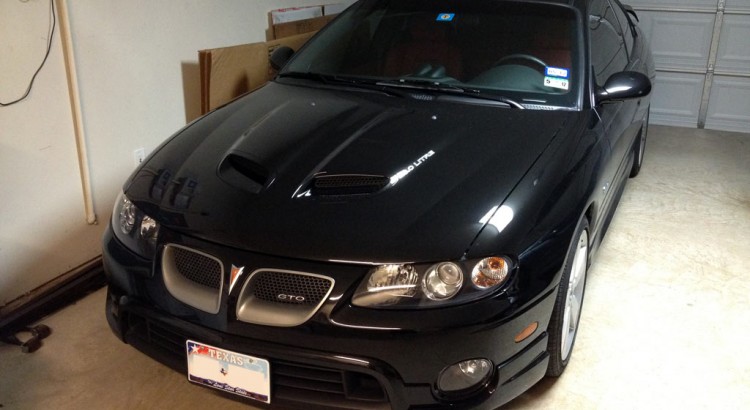 A friend recently bought a Mitsubishi Lancer Evolution MR and, like many car enthusiasts, was wary of drilling into his paint to install the factory-supplied front license plate bracket that the state of Texas lamentably requires. We started looking for a less invasive option for him, at which time I realized that I, too, needed a better solution for my front plate as well. Ever since I transported my GTO from Florida to Texas last spring, my front plate has been sitting up in the dashboard. I long ago gave away the front bracket supplied by Pontiac, figuring that I’d never live in a state that requires a damnable front plate.

It occurred to me that having a license plate propped up against the inside of the windshield was a potential serious safety hazard, one that could instantly turn into a tin stiletto should I ever (God forbid) get into an accident. So my friend and I decided to both order proper license plate brackets and solve both our safety and legal issues right then and there.

For his Evo, we ordered the Swift Motorsports hideaway plate holder. It’s a mechanical retracting plate bracket that mounts to the bottom of the car, so you only need to drill into surfaces that aren’t normally visible, keeping any eyesores hidden. Even better, you can stow the plate under the car by flipping it down 90 degrees and pushing it back under the front end. Great for car shows, car washes, or if you really hate the look of the plate, driving out of state.

For my GTO, I wasn’t convinced that there was a good place to mount the hideaway plate. Unlike the Evo, the underside of the GTO’s front end — even with the SAP kit included — has a nice flat lip, but it doesn’t go back very far. It was the aft end of the hideaway bracket that didn’t seem to have a decent mounting spot. But I couldn’t just bite the bullet and go with the factory solution, because the Sport Appearance Package front end is incompatible with the standard GTO front plate bracket — and the special SAP-compatible bracket is long out of manufacture and near impossible to find.

Then I discovered the ultimate solution on the LS1GTO forums. Another member, who had a GTO with the SAP kit almost exactly like mine, had fashioned the perfect solution out of none other than a mid-’90s Ford Explorer front plate bracket, which in his case he had mounted with only double-sided tape! He said that some minor trimming was required but didn’t elaborate, and the one picture he posted of his car with the bracket attached wasn’t close up enough to afford me any detail. But it looked perfect, and the fact that it could theoretically be done without drilling any holes for screws was mighty tempting. So I went searching, found the Explorer bracket on eBay, and crossed my fingers that the install would go smoothly.

Below, I’ll show you how I did it.

When I got it, I noticed that the bracket was equipped with two posts that looked like they’d slot in between the SAP grille slats on the front of my GTO — and they did, almost perfectly. But they were a little too tall, so I used a box cutter (real precise, I know) to shave down the top of each post about a quarter of an inch. (I wasn’t measuring or anything, but that’s approximately what it was.) This left a couple of millimeters of space for my mounting option of choice: industrial-strength Velcro pads.

In the photo below, you can see where I trimmed the bracket down, where I installed the self-adhesive Velcro loops, and where I also added a rubber pad to prevent the plastic bracket from rubbing on the lower lip of the SAP fascia.

It takes two parts for Velcro to work, naturally, so I mounted the other half of the Velcro pads to the top of the first horizontal slat in the SAP grille, where you can’t even see them unless you kneel down (or are at least a few yards away from the car). I chose to mount the Velcro hooks, not the loops, to the car, because they’re the “hard plastic” feeling part of the Velcro and less likely to degrade from weather damage if the bracket is left off for any length of time.

Oh yeah, and please excuse the horrible dirtiness of the car at the moment these photos were taken. It’s been hard to find either the time or energy to wash it, when you’ve got a two month old baby and it’s 46 degrees outside…

Finally, to mount the plate bracket, all I had to do was push it onto the grille. It locked onto the Velcro, sank about an inch deep into the grille and ended up sitting at a near perfect 90 degree angle. The bottom of the bracket normally makes no contact with the SAP grille, but probably does when at speed — so the rubber pad I added will prevent any damage there. Even without the Velcro, the bracket’s posts are a tight enough fit that it wouldn’t be likely to fall off.

Best of all, it required no drilling or permanent alteration of the car.

Now I’ve got a plate mount that isn’t likely to cut my throat in an accident, doesn’t hang down too low or look awkward, didn’t require drilling, and which can be removed and reinstalled simply by pulling it off and pushing it back on. Hard to beat that.

I also considered (and may still be considering) adding an “emergency tether” in the form of a pair of black zip-ties, just in case the current mounting fails somehow…but I really like the easy removal that this setup makes possible, so I’ll probably push my luck on that one.

If anyone else out there has a 2004-06 GTO with the GM Sport Appearance Package and needs an aftermarket solution for a front license plate, then based on my experience so far, this is a great way to go.

Kudos to user “time2shine” of the LS1GTO.com forums for the original idea!