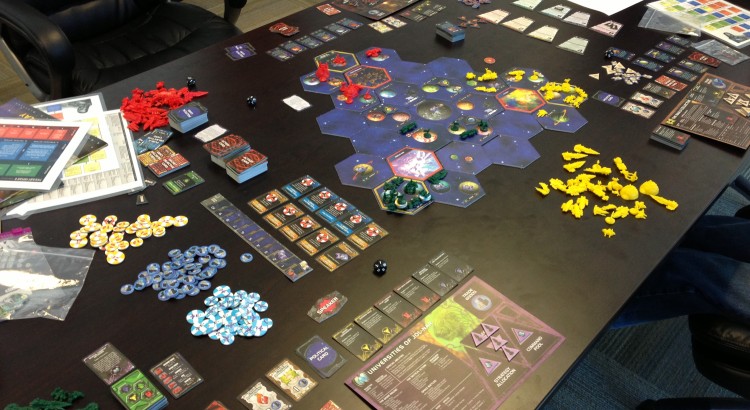 Galactic expansion continued today for myself and my two compatriots-turned-opponents in our game of Twilight Imperium. With the first round now behind us and the mechanics of the game fairly well understood, we plunged into round two with a mix of reckless abandon and curious trepidation. Because we had completed the strategy phase for round two in advance at the conclusion of yesterday’s session, I had once again slipped up and selected the Technology strategy card despite playing as the Universities of Jol-Nar, whose racial ability obviates their need to take said card. Still, I decided to go with it as I only really wanted one particular technology that turn: XRD Transporters, which would allow my carriers to double their movement speed.

The Embers of Muuat faction, meanwhile, began to focus on trade as his revenue source of choice. With a War Sun already deployed and the ability to produce more already on deck, those trade contracts could start to offer useful resources for construction. Our Naalu player continued to focus on building carriers and swarms of fighters to fill them with. As round two began, we all continued to expand outward from our home systems and build new units to take with us.

Early on, I played my tech card and scored the XRD Transporters. Having the ability to move carriers two hexes instead of just one quickly became advantageous as I was able to strike out and capture several more planets, which really started to add to my bank of resources. Perhaps the most interesting political event in round two was the vote that came up: our Muuat player called a vote on a law that would restrict the maximum fleet size to 5 units, possibly intending to vote in favor of it. Unfortunately he realized too late that he did not have any available influence with which to cast a vote! My Naalu opponent had insufficient voting power to overcome my own, so the resolution went down to defeat as I voted against. As a bonus consequence, all three of us had our maximum fleet size immediately raised from three to four units! It seems that sabre-rattling is en vogue here in the cosmos of the new Imperium — but will it yet turn into open war?

By the conclusion of round two, I had even managed to stake a tenuous claim on Mecatol Rex, the central planet of the galaxy and the former seat of the long-dead ancient empire that came before us. I did not claim it by moving ships there, but by executing the secondary ability of an opponent’s strategy card which allowed me to pay resources to claim an unoccupied planet in a neighboring system. By that point my XRD Transporters had gotten me next to the Rex system, so I snatched it. But I have no forces in place there, so it would be easy for another player to swoop in and take.

Although I was by this time slightly ahead on victory points, my Jol-Nar faction was by no means the only one making waves in the galaxy. The Muuat had built their second War Sun (they are, in fact, the inventors of War Sun technology according to their race card’s flavor text) as well as a second space dock, and were also making their way toward Mecatol Rex. The Naalu were expanding along the fringes of the galaxy, claiming numerous twin-planet systems for significant additional resources. A confrontation began to appear inevitable.

Here’s the state of our game board at the end of round two.

As the next round began and we were selecting our strategy cards, I decided to be a tremendous dick. I dropped an action card on our dear Naalu friends which prevented them from purchasing or otherwise acquiring a technology during that turn. I had seen that he was one technology away from the XRD Transporters and decided, in a showing of true Jol-Nar arrogance, that I needed that advantage to myself for just a bit longer. He was furious. I’m sure I’m going to be paying for that at some undetermined future point, most likely when I least expect it. Ah well!

This time I did not take the Technology strategy. Instead I chose Bureaucracy, which by this time had two Bonus counters on it. Because we’re playing a variant of TI:3 wherein all ten objective cards are revealed at the start of the game, but all except the first one are locked by “red tape”, the Bureaucracy card’s two Bonus counters allowed me to unlock two new objectives, thereby making them eligible for completion. I needed this because I could qualify for the third objective, which was to have at least two tech upgrades in each of the three available colors. For my other strategy I selected Leadership because I was by this time in desperate need of command counters.

The Muuat again chose the Trade strategy. Their player had effectively used this strategy in round two to amass a significant number of trade goods. He also picked tech (since my friend with the Naalu faction was restricted from buying any, due to the unfortunate assassination of his top scientist), although for a moment it looked like he wouldn’t — which would have prevented me from getting any tech that round! The Naalu went with Production, seeking to continue fleet unit construction at the same frenetic pace. I think he also picked Diplomacy, but I can’t recall correctly.

As round three’s Action Phase began and the meat and potatoes of the round ensued, we all continued expansion and production efforts. The Muuat managed to get both of their War Suns, as well as a space dock, within striking distance of Mecatol Rex from two neighboring systems. The Naalu now claimed an impressive total of nine planets as their own, and had completed deployment of a second space dock into a neighboring system so that production could be undertaken twice during a single round. (Actually three times, when you count the Production strategy card he’d chosen!) My opponents were definitely ratcheting up the challenge.

After leveraging my Leadership strategy to gain command counters early on, I went on a production binge. I began shipping carriers hauling ground troops, fighters, a planetary defense system and a new space dock out of my home system. Once the homeworld was clear, I ramped up my home space dock to produce three Battlestars — er, I mean cruisers. I also moved my lone dreadnaught one more system beyond its home base.

By the conclusion of the third round, the Muuat and Jol-Nar were knocking on each other’s doors on the outskirts of Mecatol Rex. Although I now had the technology that allowed me to build War Suns, I did not yet have the resources to spare on the costly endeavor of actually producing any. Staring down the face of two opposing War Suns, I started to wonder if my fleets were really cut out for this. I decided not to move any units into the Rex system for fear of losing them outright.

Here’s how our game board looked after round three:

Before wrapping up for the day, we executed the strategy phase for round four in advance. This one was a real nail-biter. I chose the Production strategy and the Warfare strategy this time, having a particular plan of action in mind. As part of that plan, I then played an action card that placed a command counter from the Muuat faction on Mecatol Rex, effectively preventing them from activating (or therefore entering) the system this round.

In the end, my plan is probably too ambitious for my own good. None of us have gotten into combat yet in this game, and my race is endemically less effective in battle (to the tune of a -1 to all my combat rolls). I may be about to find that I ramped up too far, too fast without certain crucial supporting infrastructure. But as the maelstrom of rules and requirements swirls around each of us, it’s easy to get carried away — and think you’ve got everything lined out for a big strategy when in fact you missed some critical item that could keep you from it.

I suppose we’ll find out tomorrow as round four’s Action Phase kicks off!