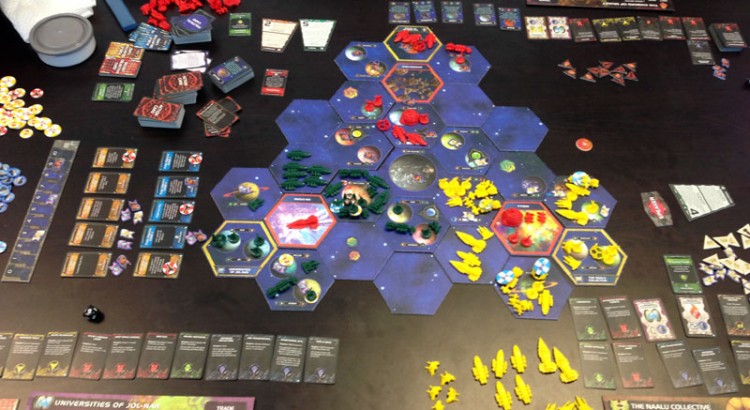 Political panic reigned in the back offices of the imperial senate as the Jol-Nar representatives revealed that their new fleet of carriers had executed an illegal move at the conclusion of round three! To be serious, while examining the photos I took of yesterday’s game board, I realized that I’d both constructed new cruisers and moved them in the same turn. Ordinarily this isn’t possible because you can’t move ships out of an activated system (and you have to activate a system to build ships there). Whoops. Didn’t I say on day one that this rule was hard to remember?

After undoing that move to true things up, I also changed my mind on where to place the Muuat activation token that I’d placed on Mecatol Rex, effectively preventing our Muuat player from going there this round. I decided to let him have Rex in order to claim the 1-VP objective for doing so, in hopes that the other players would then reconfigure themselves in a manner more advantageous to my strategy. This is a game among friends, and most of us are on our first outing, so we were playing pretty nice. (Such tact would later come back to bite some of us in the ass, but I’ll get to that!) Instead, I placed the token on the system that contained his second War Sun and, more importantly, his space dock so that he could not move those units or produce new ones (except by using the Production strategy card).

Our buddy with the Naalu race was getting aggravated. He was now on a full-out warship production binge, clearly staking the majority of his offensive strategy on both sheer numbers as well as technology that served to benefit his fighters in combat. He was also by now the player with the largest fleet of dreadnaughts. After moving my new cruiser fleet (that I had produced last round) out of my home system, I went to work producing still more cruisers. I also leveraged the Jol-Nar’s racial ability to activate both the primary and secondary ability of the Technology strategy, seeking to line up enough prerequisite tech to eventually acquire the Type IV Drive that would give my cruisers and dreadnaughts +1 to movement speed. In short, I was seeking to produce a stunning array of battleships that could jump two or three systems at a time.

It wasn’t long before we started to become seriously disturbed by the actions of our Muuat player. In addition to taking Mecatol Rex as expected, he started negotiating deals with the Naalu and myself for unrestricted passage through the special sectors near our home planets. In my case, he wanted me to kindly step away from the wormhole endpoint so that he could park a single dreadnaught in the ion storm near Jol and Nar. With the Naalu, he requested the ability to sail a War Sun into the nebula adjacent to their home system. We had no idea what he was up to but felt confident enough in our ability to defend our home systems that we decided to allow these seemingly innocuous space tours.

The strategy cards I’d picked for round four ended up being inappropriate since I was not able to capitalize on my strategy as soon as I would have liked. But I did pick up some good tech, used the Production strategy to build a good number of units, and because no one had selected the Assembly strategy, I was still the Speaker (and thus the first player to choose a strategy card next turn). For my final move of the status phase, I qualified for the “I now spend 20 influence” objective for two victory points. But by this time, my Muuat opponent had also risen dramatically up the VP counter and was now merely one point behind me.

This time it had to work. The strategy had to come to fruition. Upon retrieving my command counters from the board and pulling two more from reinforcements as is standard end-of-round practice, I put nearly the whole kaboodle into Fleet Supply, doubling the maximum size of each of my fleets to a whopping eight capital ships. A disturbed hush descended upon the council chambers as representatives of the other races observed this. What the hell are those Jol-Nar fish freaks doing over there?

A similar sentiment was soon raised by the rest of us as the Muuat continued to make some very strange moves, amassing ships in curious locations and then taking no action. Our Muuat player pulled out of Mecatol Rex as he had promised, so his intentions seemed on the level. Nevertheless, myself and the Naalu continued to build units like they were going out of style. With my new Fleet Supply caps, I pumped out a ridiculous number of cruisers, amassing just under a dozen capital ships in the systems surrounding the galactic center. Everybody could tell that something big was about to go down, but no one was sure what or who was going to start it.

I had to get everything in position, all units in just the right place. For a brief moment I thought of executing the plan, but the tricky Naalu with their “we always go first” racial ability meant that I couldn’t guarantee I’d survive the plan. I decided to pile up more resources, go for the Bureaucracy card next round and try to score multiple objectives. For one of them, I’d need command counters, so I passed fairly early.

Then the Muuat put the smack right down on us. He completed his Secret Objective, which — as it turns out — was to control the systems directly adjacent to all the other players’ home systems! And we’d let him walk right in! Immediately we felt like clods. On top of that he scored a Stage II public objective which got him all the way up to 9 victory points, just one shy of winning the game. While we were standing around acting gobsmacked, the real bombshell was dropped: the Muuat had a special action card, meant to be played at the conclusion of the status phase, which allowed them to instantly move into a neighboring system. This enabled him to claim an artifact token in that system, which is worth an instant victory point — the final point he needed to win. GAME OVER!

I could practically see the Jol-Nar fleet captains being berated by the Hylar ambassador behind the closed doors of his council chambers: “How could you allow this?! We gave you a dozen ships, we paid you piles of resources, we curried political favor, we spent years planning this offensive…and you let a Muuat dreadnaught go on a sightseeing tour through our ion storm?! Bah! Get out of my office!” he’d yell, the briny water in his fishbowl helmet coming to a slow boil.

Apparently, even our Muuat player hadn’t planned this ceremonious coup d’etat, having only just noticed the adjacent artifact and the action card that would let him exploit it at the last minute. Things started to get a little chaotic as we checked the game rules over numerous formalities, mostly because the Muuat units needed to execute an unusual move (actually backtracking over their origin system) in order to pick up the ground troops needed to secure the artifact system. We also discovered that we’d forgotten (or misinterpreted) what constitutes “controlling a system” — you not only need to have ownership of any planets there, but you also need to have at least one capital ship in the system! The latter requirement had been unknown to us, and it actually meant that I no longer had control of my home system and thus, due to another rule, was technically not allowed to claim objectives. This would have probably halved my victory points, and because the rest of us hadn’t been aware of the particulars either, we decided to rescind this rule only for our introductory game.

Since there are still two more lunch gaming sessions left in the week and the abrupt end of our first Twilight Imperium experience was so unexpected, we agreed to flip the victory point track over to the “Long Game” side (where it takes fourteen victory points to win instead of ten) and continue playing, just to see what will happen. If nothing else, we haven’t had a single space battle yet (believe it or not!) and after all of our continuous warmongering, suffice it to say that we’re all chomping at the bit to start slinging cannon fire and torpedoes around. Tomorrow things are going to get very interesting very quickly, and it’s going to be a blast.

Here’s where we all stand now after five rounds. And in looking at it from this angle, I think the Naalu (the yellow pieces) are about ready to go cruisin’ for a bruisin’.