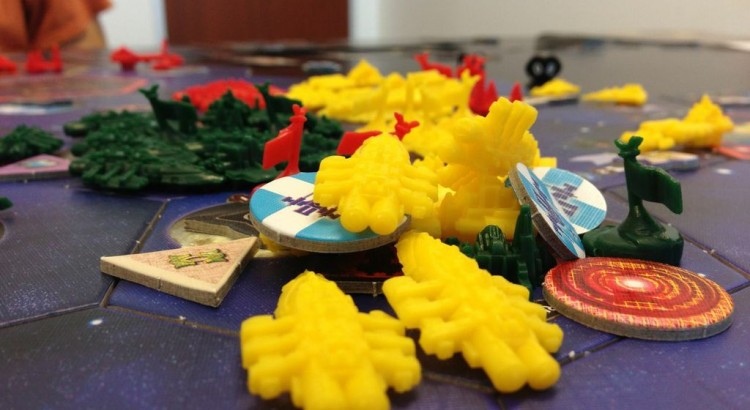 After the Muuat faction officially won the game in the previous round by chaining three objectives together (thanks to the Bureaucracy strategy card), we decided to flip over to the “Long Game” side of the victory point counter and go for 14 points instead of the original 10, just to see what would happen. Since this put a tremendous asterisk on the game (on top of all the little ones we’d applied in the first four rounds thanks to misunderstanding or forgetting rules), we started to play a little fast and loose. (In the figurative sense. It’s tough to make Twilight Imperium literally play fast.)

I came into round six feeling brash and decided, after a turn or two of prep work and piddling around, to put the secret Jol-Nar agenda into play. At first I had thought about letting the Naalu faction have their turn at controlling Mecatol Rex, just to let him score a victory point which he badly needed. But then, remembering what being nice to the Muuat dreadnaught had got me, I decided to go for broke. I activated the Rex system and moved a crap-ton of ships into it — a carrier (with fighters and ground troops), a dreadnaught of my own, and six cruisers.

My fear was that I would be immediately attacked by at least one faction. Fortunately, the turn order would give only the Muuat one turn before it would come back to me, and they chose not to invade Mecatol Rex, having already claimed that objective card. As such, when my second turn arrived, I played an action card on the Rex system that prevented any other player from activating it that round. The deal was sealed.

Frankly, this should have been a lot harder. Up till this point, we’d been suffering under the illusion of another gross rule misunderstanding. Early in the game (back on day 1 or 2), I asked our Muuat player (the only one of us who had ever played Twilight Imperium before, albeit one time) how additional space docks can be built. For some reason, rather than just go to the rulebook, we used our collective memory and got it very wrong. Henceforth, we operated under two flawed assumptions:

None of this was right, and in fact the rules are painfully harsh in terms of the requirements for new space dock construction. You can build a new space dock on any planet you control, but you have to have controlled that planet for the entire round thus far (i.e., you can’t have just claimed the planet in the current round), you have to activate the planetary system to build the space dock, and then you can’t produce units at the new space dock until the next round (because, as mentioned, the system is already activated). All of this means that I would have had to hold Mecatol Rex until the end of the round, then build my space dock in the following round and hold Rex until the end of that round so I could claim my secret objective in the status phase. Instead, I brought my new space dock to Mecatol Rex in a carrier and just plopped it down. This is how we’d all been handling space docks the whole time.

By this point, since we were playing pretty loose with the rules and because we had previously realized our mistake about the space docks and elected to continue using our own interpretation for this game, we let the secret objective through.

The Naalu were pissed. Boy, were they pissed. I’d taken Rex before they could have their turn at claiming it, stuffed it with a staggering array of ships and then had the gall to prevent them from even attempting to activate the system for the entire sixth round. As round seven began, seeing that he was significantly behind in victory points, our Naalu player turned to naked aggression. And boy, was it entertaining.

Remember all of those yellow Naalu fleets in my earlier game board photos? They immediately began to pummel the Muuat faction. Because the Muuat had a relatively small number of units in each system, the Naalu picked a fight with the faction they thought they had a chance of eliminating. It was pretty interesting seeing piles of yellow cruisers, fighters and dreadnaughts going up against enormous red War Suns. Combat roll followed combat roll, action cards were played left and right, and gradually the Muuat units were whittled down nearly to nothing. The Naalu were fierce and unforgiving, shrugging off casualties as they pounded away at those floating death stars. The majority of the Muuat’s presence on the board slowly evaporated.

While the Naalu were taking out their frustrations on any fleet that happened to get close enough, the Muuat attempted to put the kibosh on my plans to run away with the victory point win. Remember the Muuat dreadnaught that was hanging out in the ion storm next to the Jol-Nar home system? It decided to fly into my home system, which at the time was defended only by a single destroyer. The idea was to take out my lone ship there and then blockade my space dock, which would let the Muuat claim a public objective (which quite simply read, “I am now blockading an enemy space dock”). More importantly, if I lost control of my home system, according to the rules I would no longer be able to claim any objectives!

The dreadnaught easily wiped my destroyer from the face of the universe, but he was but one ship. I had a carrier, another destroyer and two cruisers within striking distance, so I activated my home system and moved in for the kill. A short and fierce battle erupted, in which both dice and action cards flew (at one point I damaged the Muuat dreadnaught and immediately threw down a “Direct Hit” card which enabled me to destroy the ship outright. In turn, my opponent threw down a card which not only negated my card, but the initial hit as well!). Finally, though, the Muuat dreadnaught went down to defeat, and I had control of my home system again. He was no longer blockading my space dock, and couldn’t qualify for the objective. A clever idea, but he simply didn’t have the ships to get the deal done.

The remainder of round seven passed with the Naalu taking over a fair number of formerly-Muuat systems, the Muuat producing what new fleet units they could (mostly cruisers) to replenish their decimated lines, and me basically doing nothing of importance since I had already activated every system that contained any of my ships. Here’s how our game board looked as we went into status phase:

As the status phase wrapped up, the Muuat and I both claimed fairly meager objectives. We were very close on victory points, but I was ahead by one.

The end was so close we could taste it. We couldn’t stop now, having come this far, so we decided to finish it out. The stress of strategizing, scheming and going to war was taking its toll on us now; we actually felt physically and mentally spent from the challenge. The strategy phase was the most competitive one yet; I moved in to take the Bureaucracy card, planning to unlock the Imperium Rex objective which would immediately end the game (while I was still ahead on victory points, giving me the win). In response, the Muuat player drew from his increasingly awe-inspiring hand of Action Cards and played one that forced me to put the Bureaucracy card back and choose another! So I picked Leadership, if for no other reason than I was low on command counters and it would allow me to play my turn before anyone else (except the Naalu, of course, given their innate racial ability to always go first).

Here’s where I erred. I should have chosen the Diplomacy strategy instead — not because I needed it, but because it would have prevented the Muuat player from getting it. Diplomacy lets you force your opponents to each put a command counter on any system you control, meaning that they cannot activate (and thus cannot invade) that system for the entire round. My plan to grab my final public objective was to do exactly what the Muuat had tried on me last round: take over his home system and blockade his space dock. Except unlike the Muuat with their lone dreadnaught, I had a fleet of seven cruisers and a dreadnaught that I could fly directly there — assuming I got the High Alert token which would give those ships +1 to movement. Since the High Alert token can only be placed when you use the Warfare strategy, I chose Warfare — since I was afraid if I didn’t choose it as my first pick, the Muuat would take it from me. (You see how deep the paranoia rabbit hole goes?)

Thanks to that gaffe, when the action phase began, we reached a sort of stalemate almost at once. I needed to spend my first turn playing the Warfare strategy, immediately after which the Muuat faction played Diplomacy on their home system, shutting me out for good. In the end, our Naalu friends were kind enough to make it easy for me to invade one of their systems and then take the artifact on the associated planet, which instantly gave me an extra victory point — not enough to win outright, but enough to put me two up on the Muuat faction. Seeing no way to overcome the point deficit, our Muuat player initiated the Bureaucracy strategy, unlocked the Imperium Rex card and ended the game immediately. By that point we were all exhausted, and there was definitely an element of “ENOUGH already!” present in that closing move.

A final view of our game board in its ending state, just before the teardown:

This was the most fun I’ve ever had playing a board game — and is definitely in the top few percent of all experiences I’ve ever had with games of any type. The scale of Twilight Imperium is so grand, so multi-faceted and so filled with drama and intrigue that there is never a dull moment. It’s like a gripping political thriller, an action-packed space opera and a survival horror game all smashed together, wrapped up in a ridiculous amount of very high-quality tokens, models, pieces, cards, and other paraphernalia.

You’ll spend more time playing a round of Twilight Imperium than you ever thought possible for a tabletop game, but you will love every minute of it — most likely even if you lose. It won’t be easy to find the time to do this again, but when it happens, I’m going to seize the opportunity. It is an absolutely amazing game, and if you get the chance to try it (and can set aside about 8-10 hours for the pleasure), I highly recommend it.