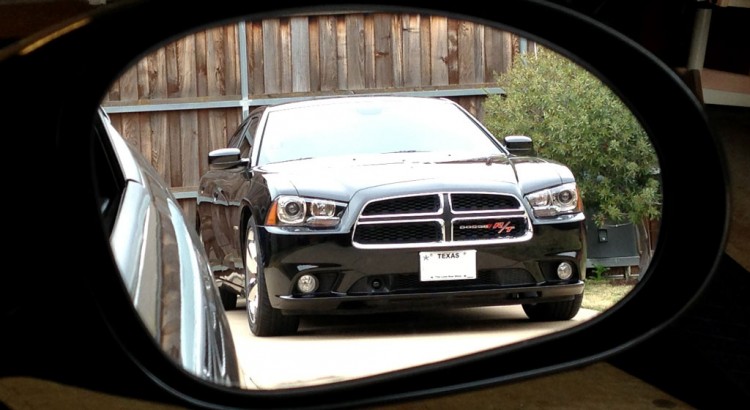 Since we brought home our new 2012 Dodge Charger a few weeks ago, Mrs. Oddball and I have totally fallen in love with the thing. I remember feeling pretty giddy about the quality oozing from the Mazda6 that we purchased in 2004, but at the time we were moving up from a mildly-equipped Pontiac Vibe. It’s not like we were used to BMW engineering or any such thing. But the Charger is a whole new class of automobile, and with all its technology underfoot is the closest thing I’ve ever experienced to driving a space shuttle on wheels.

But it needed just a little something. I live for the small details, the finishing touches we put on things after everything else is just so. Like the cherry on the top of a masterfully-engineered ice cream sundae, the Charger needed an equally polished — and equally red — finishing touch.

The heritage R/T badge (Mopar part number 68104034AA) for the car’s front grille was the missing detail. Factory standard when you order the Charger R/T Road and Track — a special handling and appearance package for the R/T trim level that our R/T Max didn’t come with — the retro-style red badge simply clips onto the plastic honeycomb mesh and is designed to be installed in the lower driver’s side corner of the grille. I’ll admit to being a sucker for badges when they’re tastefully applied (and as long as they don’t advertise things you’re not packing; I wouldn’t slap an R/T badge on a base Charger or a 5.0 badge on a six-pot ‘Stang), and since our Charger only had a single R/T badge on the trunk lid, I decided that wasn’t sufficient.

My problem was that I also really liked the Dodge badge that came installed by default on our grille. It featured the two red slashes (known colloquially as “war paint”) that has become the symbol of the Dodge brand of late (the ram’s head logo is now mostly reserved for Dodge trucks, as it should be). After mocking up some possible options in Photoshop, I realized that there was a chance that I could fit both the stock Dodge badge and the heritage R/T badge on the grille at the same time. My only worry was that it would be overkill, but the only way to truly judge would be to set it up in person and take a gander.

Inside was the badge, made of chrome-plated and red painted plastic. On the back were four prongs designed to fit perfectly into two separate spaces on the honeycomb grille. Each prong had a “stop” on the rear edge which would snap into the grille and hook onto the back of the honeycomb mesh to prevent it from falling out.

First I had to get the stock Dodge badge off the grille, because I needed to move it over to the left to make room for the R/T badge. It was a serious bitch getting that thing off; the 2012 Dodge badge is held on by six prongs, two each behind the first D, the second D and the “war paint” slashes. (In contrast, the 2011 Dodge grille badge — which lacks the war paint — has only four prongs, two each behind the O and the E.) I ended up wrapping a shop rag around my fingers before prying up on it, as it was on so tight that it was killing my fingers. That got it off with all six prongs intact.

Next I test-fit the R/T badge and the Dodge badge on the grille together and, having decided that there was sufficient room for both, I snapped them into place.

The result was better than I had hoped. Because our Charger is equipped with a chrome grille surround, the chromed “Dodge” letters and the fine chrome outline around the red R/T badge offer a perfect amount of highlighting. Additionally, the red war paint slashes seem to melt into the bold red of the R/T badge, almost as if it was designed that way.

I imagine that members of the debadging crowd are having a heart attack right now, but I’m happy as a clam with the new aesthetic. I’ll leave you with a handful of photos so you can decide for yourself.