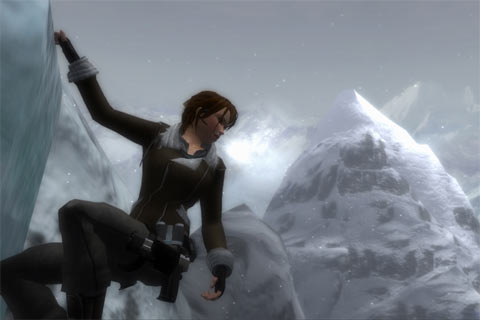 I took a break this evening for long enough to briefly try three new game demos for my Xbox360 which I downloaded from Xbox Live. Figured I might as well post my impressions here for the “daily update.”

The latest game in the Burnout franchise is the first to arrive on the Xbox360, but it’s not much different from the PS2 and Xbox versions that have been out for a while now. The primary differences are the enhanced graphics and improved sound effects, both of which are undeniably awesome. The demo is pretty short but lets you play a sample “Road Rage” mission where your main goal is to get as many takedowns (that is, knock as many opponents off the track) as possible during the allotted time. As long as you keep scoring takedowns, you get extended time to keep driving, in classic arcade style.

I never quite thoroughly enjoyed previous Burnout titles, having tried both the original and Burnout 3 for the Xbox. But Burnout Legends on the PSP was pretty good, so I thought I’d check out the demo for the 360. It’s actually quite fun, and very similar to Legends. Best of all is the wanton destruction: you have never seen cars fly apart like this, complete with broken metal, debris and other fragments of your ride. The car bodies will actually twist and distort, tires will bounce off and the whole thing will go up in a dazzling shower of sparks and glass. It’s great fun for a while; not too deep, but a great way to relieve frustration, undoubtedly.

This is an arcade-style flight simulator set in WWII that puts you in the cockpit of warplanes from that era and sends you off on various missions. It’s definitely not a hardcore sim, more like a freeform air combat game with controls similar to Freelancer. The voice acting is a bit irritating (with stereotypical examples of southern drawls, British dialects and German “zeeeeees is KAOS” accents all present and accounted for in the demo alone). The controls aren’t too hard to use, although you’re often expected to use a “target camera” that will both help you find your next objective and leave you very dizzy all at the same time.

Sound effects are pretty good, although it can get a bit crazy when you’re in battle and everybody (even the enemy) is jabbering at once. Sometimes during the guided tutorial flight, I would get to a particular objective before the lengthy dialog had caught up and before the game was ready for me to actually do what I was supposed to do, so I’d have to swing around and come at it again. The music was horribly irritating, with the same “combat action” piece looping back to the beginning every thirty seconds, and very abruptly (with a huge orchestra swell that made me think some new enemy was coming at me every time I heard it). From what I’ve experienced, I can say I won’t be picking this game up — certainly not for $60.

The seventh game in the Lara Croft spelunking adventure series that began way, way back when, Legend looks to actually return the series to its roots. No, not staring at Lara’s pixelated breasts, although I suppose you can still do that (and they are a lot less…um, pointy…now than they were in 1997). The demo level places you in some long-forgotten ruins, where Lara is looking for an ancient stone dais of some kind. The standard dual pistols are still your friends, and so are Lara’s various abilities like swimming, grabbing onto ledges, swinging on ropes and all kinds of other stuff. Now you’re also equipped with a PDA to check your objectives, see what gear you’re carrying and soforth.

Funny hyperbole: At one point during the demo mission, you take a brief swim through a small waterfall. After you climb out, your as-yet-unnamed pal on the radio asks you to check on your PDA. Lara responds that it still works, of course, because it’s been billed as waterproof. “That’s good,” says your radio buddy. “Just don’t eat it…otherwise you’ll have to wait an hour.” Um….okay! Moving on.

I haven’t finished this demo yet (I came to a point where I wasn’t sure how to proceed next), but so far it looks like a very pretty, very true-to-form update of the original game. Occasionally the camera angles get annoying, with vines right in the way or some such thing, but the right analog stick will move it around to wherever you please. This game isn’t at all like the overdone, melodramatic slop that the last couple of installments have been, thankfully. It was actually rather refreshing, a bit of a return to the genre’s roots, if you will. I’ll continue the demo later, but for now I have to say my opinion of it is favorable.

Hey…did’ja notice how every game here has a silly subtitle concatenated by a colon? What is with that these days, anyhow?