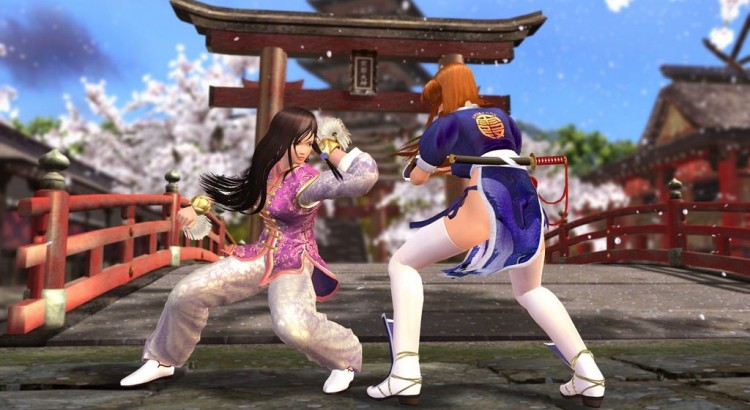 Once in a while, I like to play a good fighting videogame. In the early ’90s when Street Fighter II was all the rage, my friend and I would battle it out on my SNES home version despite the fact that neither of us was terribly good at it. These days there are lots of fighting games to choose from, including some that perfect the art form of sprite-based 2D graphics and others that boast high-quality 3D models. I’m still not terribly good at any of them, but I always have a pretty good time playing them — if for no other reason than the fact that most guys like to watch people beat each other up in skilled and acrobatic ways.

A spate of new fighting games is set to arrive this fall, including new entries in two of the premier franchises in the genre: Dead or Alive 5 and Tekken Tag Tournament 2. Reading all of the pre-release media about these games got me interested in potentially buying one of them. I’m mostly a Dead or Alive kind of guy these days, but having never played a Tekken game, I wasn’t sure which one to pick. So I picked up a used copy of 2009’s Tekken 6 and dusted off my copy of Dead or Alive 4 for a bit of a compro.

Dead or Alive 4, like most of the games in its lineage, is pretty fast-paced. Unlike Street Fighter, it’s less about special moves like Hadoukens or Sonic Booms and more about staying on your toes and mixing it up in order to stay in the offensive position. One of DOA’s trademarks is its counter system, a system that is kind of like parrying — when timed correctly, countering allows you to not only deflect an incoming blow from your opponent, but also simultaneously counterattack or force them into a compromising position.

The move lists in DOA are extensive but not overwhelming (unlike Tekken, which I’ll get to). Even better, it’s very easy to pull off a good number of them for each character, often involving little more than face buttons being pressed in the correct sequence at the appropriate time. This might make it sound easy, but when you combine that with the counter system — which was made more complex than ever in DOA4 — it definitely provides a good challenge.

The most effective strategy I’ve found in DOA4 so far is to stay unpredictable, vary between low, middle and high punches and kicks and to try and counter only when I have a reasonable expectation that it will succeed. I’ve always struggled to put together the insane combos that fighting game experts rely on, and I find that DOA allows you to do pretty well if you simply keep your head about you.

DOA keeps it fairly simple with a roster of about 20 characters, each with his or her own unique move. Most of the characters use a similar system of button sequences to pull those moves off, which makes it pretty easy to get the hang of them.

By contrast, Tekken — or at least Tekken 6, which is the only game in the franchise that I’ve played — is all about offering a huge raft of choices. Featuring upwards of 50 characters, all of whom have their own unique move sets and can be customized with a staggering array of clothing, equipment, accessories and so forth, Tekken 6 aims to give you a personalized fighting experience, and keep you playing for the rest of your life by charging virtual in-game currency to unlock stuff. You earn this virtual currency by playing, so the more you play, the more you can unlock. And based on the prices I see, you’re gonna be playing a lot.

As I started getting into Tekken 6 the other night, it struck me how different the gameplay dynamics really are from Dead or Alive. For a start, I feel like I’m on bullet time. It’s not a slow-paced game, but compared to the hyper-lightspeed of DOA, it leaves you feeling a bit more in control. Unfortunately, character moves don’t seem as easy to remember as DOA4. You’ve got six possible two-button input combinations in addition to the four single face button inputs, and often need to combine single- and double-button inputs in a chain to perform certain moves. The move lists are incredibly long, and Tekken 6’s practice mode doesn’t offer a step-by-step exercise routine that teaches you each move in turn, which I found very valuable in DOA4 and Street Fighter IV alike.

From what I can tell, Tekken is all about combos, and knowing how to string moves together to create some truly devastating attacks. Just trying to alternate between bespoke moves and switch-up offense tactics, as I would normally do in DOA4, failed to have much appreciable effect in Tekken. There are so many moves, and even different fighting stances, that I often found myself doing something I didn’t intend to do — which occasionally even put me into a compromising position, like with my back to my opponent! It’s clear that you really need to take inventory and commit some of your character’s moves to memory, and with so many characters and so, so many moves on offer, the scope of this task is at first staggering.

With that said, I love Tekken 6’s character roster which truly provides something for everybody, from Bruce Lee lookalikes to military commandos, from schoolgirls to ninja assassins, and even a robot, a panda, and a genetically engineered kangaroo with a joey in her pocket (each of whom are wearing boxing gloves — no kidding). The stages are nicely designed as well, and some of them include breakable floors that can plunge you to a level below or contain other interactive environments. Overall the stages didn’t seem as dynamic as the ones in DOA with their infamous danger zones, but the design and art style in Tekken is very impressive. It’s a little more gritty and hard-edged than DOA’s kinda glossy-perfect style.

There’s no question in my mind which game looks better from a purely technical point of view, and that’s DOA4. Featuring insane amounts of polish and decent anti-aliasing, it’s a game that’s over six years old but still looks solidly current-gen. By contrast, Tekken 6 sports some of the worst aliasing I’ve seen on this generation of consoles — and take note that I’m playing both games on an Xbox 360, here — and its models aren’t as high-poly as I would expect for a fighter. At times its presentation reminds me of a much older game. Don’t get me wrong; it does look good, though this is thanks mostly to its art style.

DOA suffers from some glaring clipping issues, particularly with long tresses of hair, and sometimes even limbs (although due to the pace of the game, the latter isn’t noticeable unless you’re in the largely useless photo mode). The sound effects in both games are quite good, but I would give the nod to Tekken here for beefier punch/kick impact sounds, more variety in character sounds and a catchier (though often cheesier) soundtrack. Seriously, the yodeling dance mix on the Hidden Retreat stage? Gold.

Both games have good load times, particularly when installed. Outside of matches, DOA’s user interface is very dated but certainly functional. (The new UI in DOA5 looks like a very sweet update.) Tekken’s UI is somewhat bizarre and a little confusing, frankly, though it too is serviceable. And I’ve already mentioned the glaring omission of a guided exercise mode from Tekken, which was key to helping me learn and understand the characters of DOA. It should be said, though, that DOA4’s exercise mode could have done with a way to manually choose when to progress to the next move, so you could practice each until you were comfortable with it. (You still can, I suppose, but you won’t have the command reference handy.)

I need to spend some more time with Tekken 6, to be sure; it’s a game that you desperately want to get better at because it has so much to offer, but it’s incredibly daunting to realize how much effort that’s going to take. From where I stand right now, if I had to choose between either Dead or Alive 5 or Tekken Tag Tournament 2 to buy this September — and I kinda do, because I’m trying to save my money right now — I pick DOA5. And I did, actually, by putting down a preorder on it this week.

It’s clear to me that in the world of fighting games, I’m simply better at DOA and I find it more enjoyable to play than Tekken — at least for now. I’ve been playing DOA for a long time and I feel comfortable with the characters; I know their stories and how they work; I know many of the moves and I’m familiar with the presentation. The videos I’ve seen of the DOA5 alpha test demo look astonishingly good; it basically looks like the game we know and love has simply evolved and now offers even more cool stuff. There are wildly destructible environments (did you see the one with the crane?), characters now get sweaty and dirty as the fight progresses, and the subtle changes to the design style are for the better. As with anything, though, the truth will be in how it plays, which we won’t know for another couple of months yet.

I also appreciate that Team Ninja (developers of DOA) has gone on record as saying that they will not be offering additional characters as paid downloadable content, contending that this fragments the player base and is unfair to players who can’t afford or won’t buy DLC content. After the disaster that was Capcom’s “on-disc DLC” fiasco with Street Fighter X Tekken earlier this year, this is a classy move on Team Ninja’s part.

Overall, I’m happy to say that DOA5 is shaping up to be a worthy next entry in the franchise, despite the departure of Tomonobu Itagaki, the man who created it. I’m looking forward to unboxing my preorder!

To Tekken’s credit, I will continue to experiment with Tekken 6 and check out some strategy guides to see if I can learn how to do things “the right way” as I attempt to work my way up. Over time, I may be interested in purchasing Tekken Tag Tournament 2 as well, but only if I can improve my game — otherwise I’ll just be paying $60 to continue feeling lost and overwhelmed.