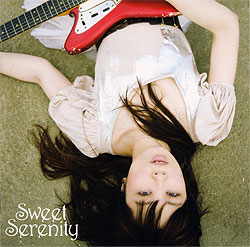 Released September 10, 2008, Sweet Serenity was Shoko Suzuki’s 20th anniversary album. Also, for the first time since Love, painful love in 2000, Shoko released an album distributed by a major record label — Sony Music Direct, a subsidiary of Sony (with whom Shoko began her career under), released the record as (presumably) part of a one-off deal (seeing as how every Shoko release since then has been an indies release). Beginning in 2007, Sony Music Direct began releasing Shoko’s older Epic/Sony material, culminating in the three box set (6 CDs, 3 DVDs) collection SHO-CO-SONGS series, featuring everything Shoko released under Epic/Sony between 1988 and 1999; in that time they also released this album.

I also should point out here that Shoko had another release between Suzuki Syoko and this album; a vinyl-only live EP release, titled Syoko Suzuki Absolutely Alone in Kyoto Jittoku 2007.12/30,31. In fact, that EP saw the first official release of both “Father Figure” and “5 years,/And then…”, both of which are also on Sweet Serenity. The Absolutely Alone… EP also had two other songs as its B-side — a new recording of “Itsuka Mata Au Hi made” (originally from Atarashii Ai no Uta) and another version of “Celluloid Heroes” (originally done by the Kinks, and first covered by Shoko in 2002 and first mentioned in this review). The EP was produced in limited quantities, though, and is no longer in print.

Interestingly, Shoko is very much a proponent of the vinyl format. In addition to the Absolutely Alone… release, Shoko’s next single after the Sweet Serenity album (which I’ll get to in the next review) would be made available only on vinyl and cassette formats; additionally, she often writes and talks about her vinyl collection (like her autographed copy of Sweet Baby James by James Taylor, or her copy of Alive II by Kiss). She will also occasionally host record listening parties at various clubs, focusing entirely on vinyl LPs. As someone who still retains a fondness for LPs, I think this is pretty nifty.

But I digress. Sweet Serenity is dedicated to Shoko’s father, who died before the album was released; this is also reflected in some of the song titles, such as “Father Figure” (the parental theme is explored further in “Rose Pink no Cheek (my mama said, so)”). Also, for the first time since Love, painful love, Shoko plays a majority of the instruments on the album — she tackles drums, various keyboards, and even guitar (making this only the third studio album ever on which she plays guitar). Longtime acquaintance Shinobu Kawai shows up on a couple of tracks, while there are a bunch of other cameo appearances by the likes of Seiichi Yamamoto, Tokyo Local Honk, and members of Moonriders and Sentimental City Romance. Additionally, Shoko produced the entire record, and arranged everything save for “Sweet Serenity & Chocolate milk-tea” and “Father Figure” (the former was co-arranged by Hirokazu Ogura, the latter fully arranged by Ryuji Yamamoto).

It’s also not really important, but the disc itself is a Super Audio CD. Thankfully they are playable on standard CD players!

Unlike Shoko’s previous album, there is less of an emphasis on unusual arrangements and instrumentation — instead, this album is loaded with mostly straightforward songs featuring all sorts of stylistic variety. The record starts off with a fast acoustic blues number, then goes through hard rock, pop/rock, mid-tempo pop, country ballads, gospel and piano ballad in only 35 minutes or so. Also, perhaps because the record is a bit on the brief side, the opening track is repeated in a short reprise at the very end. All in all, though, there’s a very good chance that there’s something that will catch your attention.

For the first time in many years, Shoko was not responsible for writing any songs for any artist other than herself in 2008 — though she did arrange and produce a new version of Kazemachi Jet for Maaya Samakoto’s album Kazeyomi (Shoko also plays keyboards and sings backing vocals on the song). Kazeyomi was released in January 2009 and subsequently peaked at #3 on the Oricon album charts (the album also features Saigo no Kajitsu, the first single composed for Maaya back in 2007).

Perhaps due in part to the publicity from Shoko’s 20th anniversary, Sweet Serenity became Shoko’s highest charting album since Love, painful love — it peaked at #91. It also charted for two weeks, becoming Shoko’s first album since Shishousetsu to spend more than one week on the Oricon album chart. She also made plenty of appearances on radio shows and the like — in addition to a fairly busy live schedule — which may have also contributed to the album’s success

THE SONGS: (Click on a title for a sample, where applicable)
Sweet Serenity & chocolate milk-tea

An upbeat, acoustic blues number, with only Hirokazu Ogura’s acoustic guitar backing up Shoko’s lead and harmony vocals. Shoko doesn’t usually do blues numbers, so it’s kinda cool to hear her take on it (and yet another example of the diversity present in her discography).

The album’s one loud, guitar rock song (around the time the album was released, Shoko referred to this song as “baka rock” — “stupid rock”). The lyrics of the song are fairly risque — I’m sure you can use your imagination to figure out what use “Electric Fingerz” might have. The backing band — in addition to Shoko’s drums and electric guitar playing — includes longtime associate Shinobu Kawai on bass and backing vocals, Jack-tati member Hiromu Kihara on additional electric guitar, and former Bordedoms guitarist (and ROVO founder) Seiichi Yamamoto playing the song’s guitar solos.

Oh, and because I keep track of such things, this song features the Shoko fill!

A wonderful mid-tempo pop/rock song, featuring instrumental and vocal backing by the band Tokyo Local Honk. Shoko does not drum on this song — the only song with drums she does not do so. Instead, she plays the Wurlitzer and acoustic guitar. One of my favorite tracks on the record; just a beautiful song, really.

Rose Pink no Cheek (my mama said, so)

In keeping with the record’s diverse nature, Shoko slots in a slower country & western ballad here with lovely harmonies (all sung by Shoko). If you’re not a country fan, you might not like the song…but I think it’s very pretty. Nobutaka Tsugei (guitarist in the band Sentimental City Romance) plays the pedal steel part.

A slower pop number dominated by Shoko’s keyboard playing, and also Moog and clavinet work from Ryuji Yamamoto. It is also the longest song on the record, clocking in at five and a half minutes.

A really bouncy pop number with some fairly impressive motor-mouth singing from Shoko throughout, where she’s singing so fast you’re waiting for her to take a huge breath at the end of each verse. Shinobu Kawai is once again on bass, and a Beatles-esque trumpet (think “Penny Lane”) is played by Moonriders member Masahiro Takekawa (who also adds cello and violin). Another favorite of mine.

A slower ballad that starts out with just Shoko singing and playing the piano (along with some percussion in the background), but eventually turns into a gospel-flavored singalong at the end. Takuo Yamamoto adds clarinet and saxophone.

A sparse piano + vocal ballad, not unlike some of the similarly-styled songs on Suzuki Syoko. Shoko’s vocals here are very haunting, and possibly her best on the record.

Sweet Serenity & chocolate milk-tea (Reprise)
A brief reprise of the title track, less than a minute in length.

Sweet Serenity is still very much in print, and available from pretty much any overseas music retailer. I think even Amazon has it listed for sale, if I’m not mistaken (but if you ever try importing something like this from Amazon, you have my deepest sympathies).

Oddball Verdict: A little short on running time, but a very excellent record regardless.