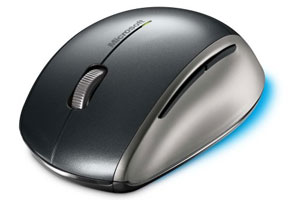 My faithful Logitech MX400 laser mouse recently started acting up, failing to register a left-click every so often. Because this is one of those problems that becomes über annoying über rapidly, I ordered a replacement. I was going to simply get the MX500, essentially the evolution of my current mouse, because I use one at work and like it. But the day I went to order it, Amazon was sold out and reporting 2 to 5 weeks to ship, so I instead decided to take a chance on a wireless mouse: the [amazon_link id=”B001F7AP1Q” target=”_blank” ]Microsoft 2.4GHz Wireless BlueTrack Technology Laser Explorer Mouse[/amazon_link] (model 5AA-00001).

Normally, I distrust wireless peripherals. I had a really terrible experience with a wireless mouse way back in the early days of such technology; it was laggy and imprecise and generally unusable for Photoshoppery. However, the notebook-sized Bluetooth mouse I use with my Vaio F12 works just fine, and the tech has clearly come a long way. Microsoft’s description of their BlueTrack technology on Amazon’s product page sounded intriguing, and the mouse was less than $30, so I decided to go with it.

When the mouse arrived, I unpacked it and set it up. This particular BlueTrack Explorer mouse is actually an older model; unlike its replacement, it comes with a charging base and a rechargeable AA battery. The base itself is not so much a base as a “foot pedal” sort of thing; it’s about as deep as the front third of the mouse, so that it can just reach the conductive contacts on the bottom of the mouse itself. The recharging base is USB, naturally; I plugged it into a powered hub so that the base would be powered whether or not my computer was turned on. Wireless communication on the 2.4 GHz band is facilitated by a small USB dongle, looking not unlike a thumb drive, which I plugged into the back of my PC directly.

The instructions indicate that the battery ought to be charged for about 15 minutes at a minimum the first time you use it; this is supposedly enough to last you through a day until you can do a full recharge, which takes about two and a half hours. So I dutifully put the mouse on its charging base for about 20 minutes or so, then started using it.

The BlueTrack tech does indeed seem to make for highly accurate tracking, and it works well on a surprisingly wide variety of surfaces. Precision is excellent for a wireless mouse and there didn’t seem to be any lag. Some reviewers on Amazon complained that the buttons require a good deal of effort to click, but I had no such difficulties whatsoever. The scroll wheel has no detents and simply spins freely, which in theory I thought I would hate, but in practice I found convenient. Compare this to the Logitech MX500, which, although equipped with a switch that toggles the wheel between detent mode and freewheeling mode, is oversensitive and twitchy in the latter. Despite the mouse’s relatively bulky size, it’s very lightweight and easy to move without overexerting your hand or fingers.

Speaking of that bulky size, though, it really is massive. You need to have fairly big hands to feel comfortable using this thing; mine are apparently not big enough, for I continually felt like I needed to stretch my fingers to get a strong enough grip on the thing to do precision Photoshopping. The recharging base is too small to be stable beneath a mouse this size, and every time I put the mouse on it, I felt like it wasn’t properly seated. Additionally, the pointer movement is wildly sensitive, and I had to dial back the pointer speed a couple of notches in Windows’ control panel. On a related note, the “enhance pointer precision” option seems to have less of an effect than it did on my Logitech MX400. When making precise movements with the MX400, the cursor slows down almost to a crawl. Not so with the BlueTrack — I routinely “overshot” the area I was trying to click on and wobbled back and forth like a drunken sailor a few times before homing in on it. However, I’m sure this is something I could eventually adjust to.

What I could not adjust to, however, was the fact that the mouse would not even last through a single day without running completely out of power. On the first day, I charged it for about three hours — more than enough for a full charge, according to the manual — before taking it off the charging base. I used it for maybe two or three hours total, the rest of the time leaving it on my mouse pad, where it goes to sleep automatically after a minute or two of disuse. By the end of the evening, the mouse’s red LED was pulsating to inform me that I needed to recharge it. Are you kidding?

OK, I figured maybe I should leave it on the charging base overnight. So I did. The next day, after a solid 10 hour charge, I again took the mouse off the base and did some light computing for an hour before I went out for the day, leaving the mouse to fall asleep on my mousepad as usual. I then returned to the computer around 8:00 in the evening and started working on a Wolfenstein level. After about two hours I started noticing that my clicks weren’t registering, and looked down to find the mouse’s red LED again blaring that the battery was dead. What a crock. I had to go get the old MX400 out of the closet where I had mothballed it.

After this incident, I took out the BlueTrack mouse’s battery — a 2100 mAh rechargeable AA supplied in the box by Microsoft — and popped it into my handy [amazon_link id=”B000RSOV50″ target=”_blank” ]La Crosse BC-700 battery charger[/amazon_link]. I also added two known-good Powerex AA rechargeables that I’ve had for a while, so that all three could charge up over night. Not only would my charger tell me if the Microsoft battery was bad and unable to hold a full charge, but I could also test the mouse using my other batteries to see how it fared.

The following day, I came home from work and checked on the charger. The Microsoft 2100 mAh battery had only been able to take about 400 mAh worth of charge before reporting “full”. OK, so it looks like this battery is hosed. But my Powerex batteries reported good numbers, so I took out both of them and tried one of them in the Microsoft BlueTrack mouse. The mouse powered up — and immediately the red “low battery” LED started pulsating. [!] This is ridiculous. Out came that battery, and in went the other Powerex AA. This time, within two seconds of powering up, the mouse flat-out died without even doing me the courtesy of flashing a red light. Completely non-responsive.

That’s when I went back to Amazon and initiated a return request.

Alas, I apparently wasn’t finished getting fucked on this day, because I discovered that the mouse had been sold and fulfilled by a third-party vendor, not Amazon. This third-party vendor not only wasn’t going to cover the cost of return shipping, they were also going to deduct $8.30 from my refund to make up for the free shipping they gave me when I ordered. Altogether, that means I’ll only get back about one-third of the price I paid for this heap of slag. What a hose job!

As a final insult, I see Amazon has the Logitech MX500 back in stock today and ready to ship via Amazon Prime. Hardly the “2 to 5 weeks” they estimated a week ago.

Let this serve as a warning to Amazon shoppers. My wife actually ordered the Microsoft BlueTrack mouse for me at my recommendation (because she was ordering some other stuff from Amazon that day already). I emailed her a link to the mouse I wanted, and at the time I did, right there in my web browser I saw “ships and sold by Amazon.com” with Prime qualification. But when my wife browsed to the same link, Amazon chose to offer her the product from a third-party vendor instead. This was probably done because the third-party vendor happened to have the absolute lowest available price at that particular second, although the difference was clearly less than one dollar. My wife didn’t notice this, however, and placed the order despite the third-party vendor’s comparably awful return policy. Lesson learned, I guess.

In short, the Microsoft BlueTrack wireless mouse (5AA-00001) is a neat bit of tech, lighter than it looks and nicely equipped, but in the end the battery life was an absolute killer. I actually am returning it as defective, since I refuse to believe that this kind of battery life is indicative of normal operation. On top of that, the mouse had some physical blemishes (light scratches on the bottom consistent with mousing on a hard surface and a sharp edge that kept catching on my mousepad) which lead me to suspect that the unit I received was not even new at all. Another potential caveat of third-party sellers.

To anyone considering this mouse, I suggest you take my experience as non-indicative of typical performance for this model and consider the possibility that I received a lemon. This seems especially likely when you consider the glowing reviews for this thing that you can find floating around the web. However, if you do decide to order one for yourself, make sure you get it from a vendor with a good return policy — such as Amazon themselves.

Oddball Verdict: Fun Fling, But Too High Maintenance. Going Back to Wired.

Supplement: While packing up the mouse last night in preparation to return it to the seller, I discovered some pretty strong evidence that the mouse had been previously opened: the blister pack had tape on it to hold it together. Combined with the scratches on the bottom and the uneven edge, it looks more and more like the vendor sold me a returned or floor-model unit as new, which makes it even more galling that they’re charging me a “free shipping offset” penalty to return it. Bunch of ball-washing bastards.