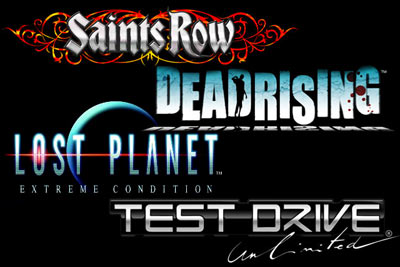 After not playing it at all for nearly two months, I eked out as much time on the Xbox360 as I could afford over these last few busy weeks. The gaming sessions did wonders for keeping my morale up, and I also got to experience a whole ton of new games via the downloadable demos offered by Xbox Live Marketplace. A couple of the demos were so good, in fact, that I went out and bought the full retail games afterwards — I’ll have complete details on those purchases in another entry. For now, here are my impressions of the demos I played.

In this game, you play a random noname guy (who never speaks) living in the inner city, who one day nearly gets his ass blown away in a gang war drive-by. He is saved by the smooth-talking leader of yet another gang, a gang whose purpose is apparently to clean up the streets and restore order to the city. (It’s clear, though, that this gang just wants to do that by blowing away all the other gangs, so I guess their mission is not really any different than their rivals.) You get drafted into this gang and start doing missions for them.

This is the 360’s Grand Theft Auto clone. It was almost like playing a bizarro GTA, in fact, because it looked stunning — like a copy of some upcoming GTA title sent from the future — but played like a boring Tiger handheld version of same. As pretty as Saint’s Row looks, it just isn’t fun. It comes off as awkwardly un-hip while trying very hard to be something extremely cool. Dialogue is hackneyed and the missions are chock full of gang stereotypes on steroids. GTA is over the top with cursing, strippers, violence and all that, but it manages to do so without being self-aware of its own controversial nature. Saint’s Row acts like a dude with a self esteem problem trying to pimp what a badass he is. It doesn’t work, and I’m not buying it.

On the surface, this looks like a nondescript arcade shooter. But for some reason I found myself having an absolute blast with this game. The story places you on an alien world that was colonized by humans, but which came under attack from both an outside force, as well as the dormant native creatures of the planet. The result is a frozen arctic wasteland full of creepy-crawlies reminiscent of the arachnids from Starship Troopers. Let me tell you, blowing those freaks away is all kinds of fun — better than any Starship Troopers game that was ever released.

The weapons are over-the-top with destructive power, the sound effects are phenomenal and the visuals are absolutely stunning. I don’t think I’ve ever seen explosions that look this good in a game. Gameplay is simple and arcade-like, but addictive, to the point where I found myself playing the demo for an extraordinarily long time. The full version will be out in early 2007, and I’m planning to pick up a copy.

To be honest, I’m not really sure what the story is here. The demo doesn’t really bother telling you, nor does the marketing from what I can tell. What I can glean is this: You play the role of some kind of…um, government operative? Mercenary soldier? Revolutionary? I dunno. You find yourself in Mexico, Central America or somewhere like that, and apparently you’re trying to start a revolution and unseat the local government. You also apparently have one day to accomplish this single-handedly.

The graphics are good, in a Pixar sort of oversaturated and cartoony way. The gameplay is fast, way too fast, with far too much stuff going on. I found myself with little idea of what I was looking for, who was shooting at me, where I was going, what was happening, et cetera. The controls were not very friendly either. In the end I quit out of the demo after about fifteen minutes of play and deleted it off my 360’s hard drive. No thanks.

I’d seen the TV commercials for this, Capcom’s latest zombie-oriented game, by the time I downloaded the demo. You have probably seen them too. Plot: A lone guy in a mega-mall fends off thousands of zombies. That’s right, the whole game takes place in a zombie-infested mall. On the surface it sounded a bit too limited in scope — I mean, after all, a shopping mall was just one small piece of Postal 2 — so I was gonna give it a pass. Then I played the demo, and had an unbelievably fantastic time.

The sheer number of ways you can attack those hordes of zombies makes for a totally laugh-out-loud, frenetic experience. Break a flower pot over one zombie’s head, crush another one with a cash register, then bash a third one with a toolbox. The graphics and sound effects are top-notch, definitely worthy of the 360’s next-generation moniker, and the fun seems to never end. I was hooked, so I went down to EB Games and bought the full version.

I’ll have more about the full retail game in a future post, but suffice it to say there’s way more to this game than just smashing zombie heads. There’s a good story with a Resident Evil-like conspiracy element, tons of side quests involving rescuing other survivors in remote areas of the mall, and a pseudo-RPG system where your character levels up and gains new abilities as you score “Prestige Points.” It’s a hollerin’ good time, like a combination of Resident Evil and Postal 2, and certainly earns my full recommendation.

I’ve saved the best for last. Really. I probably gushed about the TDU E3 demo a few months ago, but the full retail game landed in stores this past Wednesday, and it’s quite possibly the most fun I’ve ever had placing a racing game. Ever. This might come as a surprise, given that the Test Drive series has sucked hardcore since, roughly, 1990.

Atari has done a lot to regain our trust in the name, and at least in my case, they have succeeded. TDU is a vast, free-form world of vehicular exploration that’s simply unrivaled, giving you the entire island of Oahu to drive around and explore, purchase cars, houses to keep them in, pick up hitchhikers and top models, take photos of your car anywhere and anytime, even run drugs for shady looking chaps. To get a feel for how big this is, imagine a game with the free explorative scope of the recent Grand Theft Autos, but focused purely on the driving aspect with beautifully-modeled cars and stunning, functional 3D interiors.

Now add seamless multiplayer that’s integrated completely into the singleplayer experience. You might happen across anyone else in the world while driving around Oahu; if so, just flash your lights at them to challenge them to an instant race for whatever stakes you choose. You can get together with your like-minded buddies and go on a friendly cruise around the island (a full tour of the virtual Oahu can take over an hour to complete in real-time!). Start your own car clubs for your friends (there’s probably gonna be a LS2GTO club pretty soon), enjoy virtual cruise-ins at local diners, even buy, sell and trade cars through TDU‘s integrated online marketplace. This is big, folks — it’s really big!

And — are you ready for this? — it’s the cheapest Xbox360 game on the market at a mere $39.99! If you like driving games, there is absolutely no excuse not to buy this one — get it. I mean immediately.

I’ll have a full review posted of TDU shortly, but suffice it to say, this is my pick for Xbox360 game of the year. Absolutely no kidding.