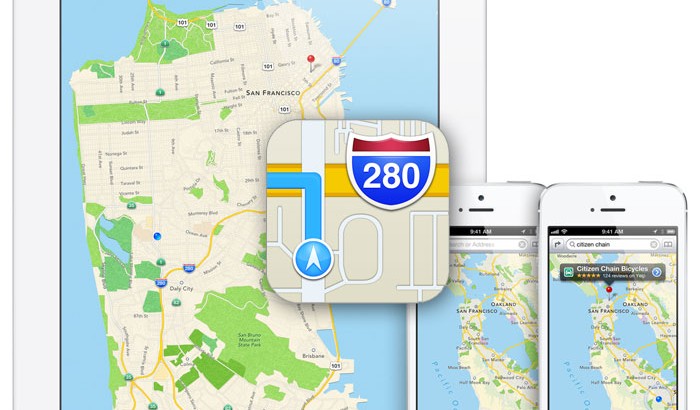 The iPhone 5 is finally here (well, it will be in about another eight hours here in the U.S.). The hour of reckoning is at hand for me, as I find that holding $500 cash and a 2007 iPhone 2G are a powerful motivator to buy a new smartphone. Given everything I’m used to having at my fingertips that this old phone won’t do — or at least won’t do without balking or crashing — just about anything would be an improvement.

Yesterday, however, Apple came along to challenge that assumption with its release of iOS 6, the latest version of their mobile device operating system. Not only is iOS 6 a fairly lackluster update compared to all of the previous iOS revisions that came before, but one its major tentpole features is arguably an unmitigated disaster. That feature is the brand-new, redesigned maps app, which completely replaces the Google Maps app that’s been a standard feature of iOS since the very beginning.

Even since before the release of iOS 6, developers who were testing its beta releases issued plenty of warnings about the unfinished quality of Apple’s maps app. Now that the final release is here, things aren’t much better, and that’s because the real problem with Apple maps is the data behind it. Sourced from a combination of partners including TomTom, Apple’s maps are woefully understated in nearly countless ways compared to Google’s:

If you’re used to using Google Maps, which is arguably among the best map services out there today, you’re in for a real shock the first time you open up Apple Maps on your iOS device.

To Apple’s credit, they did get some things right. Most notably — and this is actually a very big plus — maps on iOS are finally rendered using vector artwork. That is to say, no longer do they rely on loading bitmapped tiles that have been pre-rendered at various zoom levels. Instead, infinitely scalable vector-based curves, lines and other art are used to offer maps that load faster, use less bandwidth and can be panned and zoomed with incredible responsiveness. This is a brand new sensation for those of us on iOS, though I understand that the Google Maps app on Android has already been vector-based for some time. (When I used it on my company’s Nexus 7 tablet, I was blown away. They’re that good.)

There are a couple other areas in which Apple’s maps seem to perform well. They have some pretty nice markers and indicators for road construction, accidents and other obstacles, when even Google Maps lacked on iOS. They also have turn-by-turn directions built in now, finally, with voiceover by Siri on iPhone 5, 4S and iPad 3. If you’re driving in an area where Apple’s map data is of fairly good quality, this will be a nice feature to have for no extra charge.

But we keep coming back to that map data. Apparently it’s not so bad in the U.S., but in Europe and Asia it’s flat-out terrible. Some countries have even lost nearly all of the capabilities they once enjoyed under the previous iOS verison’s Google maps app; Thailand, for example, once enjoyed Street View, transit directions and traffic data, but in Apple’s maps they will receive none of the above (nor turn-by-turn directions). Beyond that, the maps themselves are woefully out of date or confusingly wrong in many places, especially in Europe, but also in the U.S. as well. One American user at MacRumors described how Apple’s maps indicated a set of railroad tracks running by his house, when in fact those tracks had been removed during World War II so that the steel could be used in the manufacture of Sherman tanks!

The real problem here, I suspect, is that Apple’s license to use Google Maps in their OS was at an end, and the two were unable (or unwilling) to come to an agreement for renewal. I would not be surprised if Apple decided that this would be a good opportunity for them to separate from Google and create their own mapping solution, freeing iOS of another Google-centric shackle and further putting Apple in the position of running their own show from start to finish. The only problem is, iOS users have been used to relying on Google Maps since 2007 and yanking it out from under them, only to replace it with something woefully inferior (at least for now), is a real kick in the nuts. Especially when the replacement was touted enthusiastically during the iOS 6 and iPhone 5 keynotes as being such a great improvement. Although the vector-based technology behind it may be, its current data quality most certainly is not.

This morning, when I updated our company iPad 3 to iOS 6, I took a few before-and-after screenshots so that I could compare Google and Apple’s mapping solutions in areas with which I’m familiar. Take a look at the images below:

Although Google is curiously missing a label for the big Super Target anchor store (I suspect it would show up if I zoomed in further), that is about the only thing that Apple’s maps have on it. Where are the building outlines, the parking lot’s aisles, streets and alleys? Where are 90% of the business names that I’ve found invaluable when trying to find my way around a busy retail zone? Don’t ask Apple.

Although Apple’s map is curiously the only one to actually draw the railroad tracks running through Hat Yai, it completely omits the train station itself. It also omits all but one of the points of interest found on Google’s map, and doesn’t think it’s important to label anything bilingually. This map might help my wife (a native Thai), but as an English-reading tourist I wouldn’t have a chance of finding anything on it.

In both examples above, Apple’s maps are definitely warmer and more pleasing aesthetically, but as the streets are very thin and use very low-contrast colors, they are a bit hard to see. But they do scale much more nicely than anything Google has to offer on iOS, for what that is worth.

I don’t want to sound like a hypocrite on any of the above complaints; after all, I rarely ever used Street View on my phone, never used public transit data (because out here in the burbs there isn’t any) and haven’t much use for walking directions; after all, if I’m within walking distance of a place I feel pretty confident that just placing it on a map is enough for me to be able to get there on my own. But I would be foolish not to admit that Apple’s map solution is a pretty big disappointment to anyone who has gotten used to the level of detail that Google Maps provides.

Naturally, you can still add Google’s excellent web-based maps (as an HTML5 web app) to your iOS device’s home screen and continue to use just about all of the mapping features you’re used to, save Street View. Google is even rumored to be developing their own iOS native app for mapping, which if true will hopefully be more on par with their Android mapping experience. But either one of those solutions comes with one big drawback, and that is that they probably won’t able to integrate with the rest of iOS. Tap an address in an email or click on a link in Safari, and you’re getting shunted to the Apple maps app. Apple is not usually in the habit of letting users change this kind of thing; that’s slack which is usually picked up by the jailbreak community.

So how does all of this play into my plans to acquire an iPhone 5 for myself? To be honest, I’m sitting here with a headache right now from spending most of the day trying to compute an answer to that question in the back of my mind. On the one hand, the iPhone 5 is a beautiful piece of hardware which adds several of the features I’d been wanting, allows my wife and I to enjoy the fruits of the shared Apple ecosystem (iMessage, shared photo streams, FaceTime, et al), and offers a seamless upgrade where I could just sync all of my bought-and-paid-for apps and get right to work.

On the other hand, there is still the spectre of Android via the Galaxy S-III, representing a more PC-like ecosystem where tweaking is not frowned upon, but encouraged; apps can be sideloaded, the mapping experience is divine, the screens are large and the storage is expandable via Micro SD, among other benefits. But I’d miss out on all of the Apple device interoperability that my household has enjoyed for some years now, and I might be making a decision that I’d regret — and have no good financial way out of — a few months down the road. Especially with the Galaxy S-IV expected to launch in the early part of 2013, after which I’m sure Samsung will completely forget about owners of the previous generation just like they do with all of their products.

In all likelihood, I’ll go the iPhone 5 route. Doing so will re-up my contract for another two years, and assuming I don’t pull off another harebrained trade-in scheme next fall, that’s plenty of time to see whether Apple can make good on its intentions to create a worthy competitor to Google Maps — not to mention the ever-evolving Android in general. Depending on how that shakes out, then perhaps the next time I’m in the market for a smartphone, the choice will be more clear.

So with my mind pretty well set on an iPhone 5, no preorder in hand and queues already starting at local retailers, what’s my game plan? I’m thinking of hitting the sack here shortly, waking up a little early and cruising by the AT&T store on the way to work, just to check out the crowd. I’ll then get to work early, which will enable me to leave early as well and try my luck at the end-of-the-day inventory at various stores in town. After the initial crowds die down, it’s possible that some of the stores with larger inventory pools — pretty much only Apple stores, in other words — might have some stock left over. I aim to find out.

In the meantime, my wife’s iPhone 5 preorder has been updated with a “By 10:30 A.M.” delivery time for tomorrow morning, so I know what she’ll be doing come lunchtime, one way or another.

On a Lighter Note…

One of my favorite tech news sites, The Verge, has just posted their exhaustive review of the iPhone 5. A good read if you’re interested in the overall quality of the device, beyond just the misstep that is the new maps app.