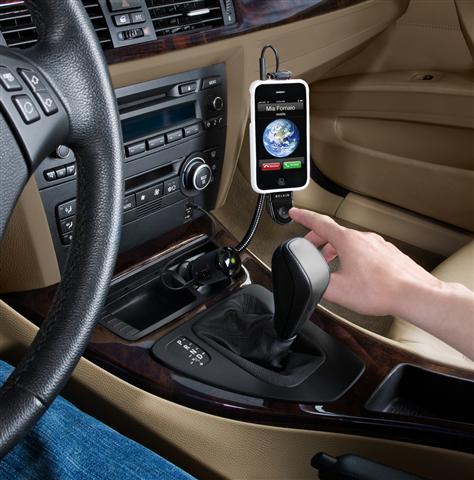 For the record, Saturday’s “cheer-yourself-up” day was a complete success. Apple and I had a fabulous time, got ourselves some of the things we’ve either needed or wanted (or both), and had some great meals and treats throughout the day. One of the items I picked up for both of us to use was the Belkin TuneBase FM with Hands-Free, an iPhone-centric vehicle adapter and FM transmitter that would allow us to play tunes on our iPhones through our car stereos.

Neither Apple’s Mazda nor my GTO has a stereo with MP3 capability or any sort of auxiliary input whatsoever, leaving us both in the lurch if we want to play anything other than regular compact discs. Without replacing the head unit itself, an FM transmitter is our only option that doesn’t involve soldering and wiring diagrams. I’ve been woefully unimpressed with essentially every FM transmitter device that I’ve ever tried, largely due to the fact that these things are all gimped by order of the FCC — an order that universally restricts their transmission power to almost unusable levels. Nevertheless, when you have cash in hand, you’re more apt to take risks and try things when it comes to products, and the Belkin TuneBase FM was no exception.

On Sunday, before we headed out to run a few errands, I decided to give the TuneBase FM a try in my GTO. The packaging was unwieldy, and as I started to unpack the device, I got the sneaking suspicion that Best Buy had sold us a previously-returned item at full retail price. There were small rips and tears in the ultrathin cardboard inserts, and Scotch tape had been used at strategic points to hold the whole mess together. Yet, everything seemed to be in place, including the protective plastic over the TuneBase’s LCD display screen. I decided to press on and evaluate the performance of the device on its own merits.

The merits, as it turned out, were few and far between. First of all, if you have a 2004-2006 Pontiac GTO with a manual transmission, you can stop considering this product right now. It completely interferes with the car’s shifter, making shifts to third tricky, fifth painful, and reverse nigh impossible. The large stalk that plugs into the cigarette lighter has the all-important LCD display screen and controls mounted on the end of it, and can’t be pivoted out of the way. The gooseneck design of the cradle means you can’t use the secondary power point in the GTO’s console, either, because the lid would be unable to shut.

Even if the ergonomics had been workable, the sound quality was worse than bad — it was pathetic. Even using the device’s maximum boost level, I still had to literally max-out the volume on my iPhone and then double the volume of my car stereo just to hear my music — and at that, it was muddy and distorted. Worse, what if I forget that I’ve jacked all these volume levels up and decide to switch to another radio station on my car’s head unit? My ears will explode and I’ll be heading to GM Parts House to order new speakers from Australia. Same thing with my iPhone — if I don’t lower the volume back down, the next time I plug in my headphones and cue up some tunes for a bike ride, I’ll be rendered deaf. Completely unacceptable. I’m not sure whether Belkin or the FCC deserve more of the blame on this, but I’m giving an equal portion to them both.

I also tried setting up the TuneBase FM in the Mazda, and it was no better. At least it didn’t interfere with that car’s shift lever, but the sound quality was still atrocious. I don’t think I’ve ever raised the Mazda’s stereo volume to the level required just to hear my iPhone output. When at first I accidentally forgot to plug the TuneBase’s audio cable into my phone’s headphone jack (a required step) and cued up the music, it blasted out of the phone’s built-in mono speaker — which actually sounded better than the sound produced by the TuneBase’s transmitter.

The TuneBase FM comes built-in with another feature that I had high hopes for, and which dashed those hopes in the end. The “ClearScan” mode purportedly takes the hassle out of tuning your FM transmitter to a clear frequency by automatically scanning for one, then locking onto it, with the press of a button. The problem was, it kept choosing a frequency that wasn’t clear. For whatever reason, it always selected a frequency that was about 200 Hz higher than the real clear spot, necessitating that I set the device manually anyhow. Worthless.

After all of this, there is one good thing I can say about the Belkin TuneBase FM: Best Buy accepted it for return with no restocking fee.