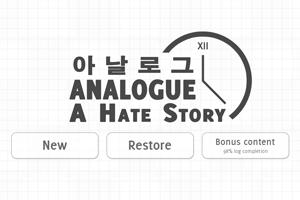 Analogue is a PC game — no Xboxes here — that was built by a very small team, featuring the work of writer and indie game developer Christine Love, art by Raide, and a catchy original soundtrack by Isaac Schankler. Proving that you don’t need an EA-sized megateam to create a quality game, it arrives with a very highly polished (if simple) presentation that is easy to understand, fun to interact with and simple enough that it needs absolutely no help screens or documentation any kind. I purchased my copy on Steam for $10, and while you’ll likely only need 6-8 hours to discover just about all the game has in store for you, it’s $10 absolutely well spent for fans of the genre.

The game places you in the role of a lone deep space salvage engineer, thousands of years in the future. A message from your boss arrives in the form of an introductory text crawl, informing you that he has a job for you. An old generational ship called the Mugunghwa, launched in the distant past from Earth by a Korean space agency, has been found accidentally after going missing hundreds of years ago. A present-day historical society has contracted your company to investigate the old derelict, and you’re tasked with linking up with the ship’s computer and downloading whatever data you can about what happened to it, including any logs made by the ship’s security AI, *Mute. “This job should be asocial enough for you, so I don’t want to hear any complaints,” your boss jibes you. So yeah, already I’m identifying with the player character!

Once you dock with the Mugunghwa and remote into its computers, you find that there is an AI still active there — but it’s not *Mute. Taking the form of a Korean teenaged girl, the AI named *Hyun-ae welcomes you excitedly and promises to help you piece together whatever data you can from the ship’s damaged memory cores. All the humans who once inhabited the ship are long dead, she laments, but her routines are degraded, and she doesn’t have memories of what happened. Maybe you can find out.

This is where it all starts to get very weird, and very compelling.

As you dig through the old records, most of which are initially damaged or missing, you start realizing that the events being written about don’t seem anything like they should. For one thing, the dates are all off. Presumably the ship launched at some point in the 22nd century or thereabouts, but log files have dates on them like “Year 312” which doesn’t make any sense. More importantly, the society living aboard the ship isn’t anything like 22nd century Earth society, it’s more like something resembling the Joseon Dynasty of Korea. Women are relegated to background, almost servile roles, their most important mission in life being to provide a son for their husband. Men take concubines and spend most of their time trying to politically usurp their rivals, and the “king” of the society claims his royal blood by being a descendant of the ship’s original captain. Yet no one apparently remembered anything about how to operate the Mugunghwa or any other advanced technology.

The more records you dig up, the more you start to learn about who the AI *Hyun-ae really is — and who she was before she was digitized into an artificial being. And just when it starts to get really disturbing, the security AI *Mute comes online and provides you a whole new, crazy perspective on everything you’ve already been told. You’re busy trying to figure out who to believe, and then disaster strikes — forcing you to make a choice from which you can never go back.

I sat up for the better portion of a night just so I could finish this game. I’d sit down to play for an hour or whatever, and the narrative would just suck me further and further in, so that I’d always have to unlock just one more log entry, or have one more conversation with *Mute, or study the Kim family tree just one more time to try and figure out how everyone was related. And at the end I was genuinely moved by how things turned out, such that I had to immediately go back and replay the last third of the game to get a different ending. At three o’clock in the morning.

The power of Analogue: A Hate Story is definitely in its narrative. While the gameplay itself is very simple yet polished, and there are some unique and cool elements to it — such as a Linux-style command line interface that you’ll use from time to time to delve deeper into the Mugunghwa’s systems — the story is the star of this show. Christine Love leaves just enough questions unanswered to make you ponder long after completing the game. The neo-dynastic society that sprang up out of some catalysmic records-erasing event is fascinating, the characters you read about are compelling and the overwhelming tragedy at the center of the narrative profoundly affected me. At one point I was sitting here saying “No, no, no, no, no, no!” in absolute horror at what I knew was coming, wondering only how awful it was going to be when I finished decrypting the logs that revealed the inevitable.

I would love to go into more detail about the story and the specific events that affected me, and describe the way I felt at the revelations the game had in store. But I don’t want to spoil it, so I’ll only recommend that if you are at all intrigued by the sound of Analogue: A Hate Story, that you go download the free trial from Steam. It gives you access to roughly the first third of the game, which is clever because you’ll get sucked so far in that you’ll probably hit the “Purchase Full Version” button by instinct when the time comes. There was no way I was going to let that story drop without answers, dammit!

Interestingly, I learned only recently that Analogue is powered by an open source visual novel engine known as Ren’Py. Clearly it’s had some customizations to give it some of its more electic elements, such as the command line interface, but it looks like you can use Ren’Py to create your own rich visual novels without too much work — and certainly not a lot of programming chops, as the scripting language looks fairly human-readable.

Ren’Py has been used to create a number of well-known visual novels, including Katawa Shoujo which I also played and adored, as well as Christine Love’s previous two games, Digital: A Love Story (see what she did there?) and Don’t take it personally, babe, it just ain’t your story, both of which are available for free. I intend to try Digital next, as its setting sounds like great fun: it plays out entirely via a simulated dialup BBS circa 1988.

If I actually had any kind of time, there’s a Ren’Py visual novel that I’d love to throw together just for giggles, but that kind of time is not something I’m blessed with right now. However, perhaps with Ren’Py’s help, Perigee Software can finally release Season of the Stomach Pump. Yeah, it’d be ten years overdue, but that’s still better than Duke Nukem Forever.