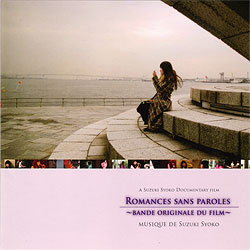 Released on July 15, 2009, Romances sans paroles~bande originale du film~ is the soundtrack album to the documentary film about Shoko Suzuki, entitled Mugonka~Romances sans paroles~. The album was released on Shoko’s own label, Bearforest Records (which is actually her second private record label; two previous releases — Love is a sweet harmony and Absolutely Alone in Kyoto Jittoku — were released on Shoko’s Angel Records label) and was preceded by a single, “I’ll Get What I Want (Chou Tsuyoko na Onna)” (which is the theme song for Mugonka). Interestingly enough, the single was released only on a 45 RPM vinyl single and cassette single.

As there are only six songs used in the entire film, the rest of the soundtrack album is filled with various live performances, taken from one of three live dates: December 21, 2008, February 14, 2009, and March 22, 2009. Most of the live cuts are Shoko solo, though the four tracks from March 22 feature Moonriders member Masahiro Takekawa on violin and trumpet, and Takeshi Shibuya on keyboards and backing vocals. Additionally, Takekawa plays violin and mandolin on “Do You Still Remember Me?” (the b-side of “I’ll Get What I Want”), and Larry Fujimoto plays bass on “I’ll Get What I Want.” Other than that, it’s Shoko’s show all the way (she plays keyboards, drums and guitar on the various tracks).

In a slight oddity, this is probably the first record I’ve ever seen where an inanimate object is thanked in the liner notes. It’s true: the Sony TC-D5 stereo cassette recorder is thanked by Shoko in the album’s notes, for “revitalizing passion & curiosity.” Several of the tracks on the album are of near-demo quality (audible hiss, etc.), because these were recorded on the TC-D5.

As for the documentary itself, it roughly covers a year in Shoko’s life, beginning in late 2008. Much of the footage is self-shot; i.e.. Shoko filming herself in her home and talking. The film starts with Shoko’s 20th anniversary concert (Sept. 2008), and the rehearsals surrounding it. You then see Shoko working on a new composition in its various stages (“I’ll Get What I Want”), including lyric writing (where you can see Shoko has YouTube bookmarked on her laptop). Next, she meets up with Shinji Harada (whom Shoko backed on tour before becoming a recording artist) and Moonriders guitarist Keiichi Suzuki (who, if at all, is known among some people my age for composing music for the video game EarthBound) for rehearsals — Harada and Suzuki are to be special guests at a (then) upcoming Shoko concert.

After a musical interlude (featuring the performance of “Tribute to Izumi Shikibu” on the soundtrack), the film focuses on Shoko’s father, who had died several months before. Shoko travels to find the place where her father lived (and ends up finding the business he ran, which appears to be a bar of some sort), and then writes and records a new song — seemingly inspired by her relationship with her father — “Do You Still Remember Me?” Another tragedy then strikes Shoko, as she finds out that Shoji Fujii — the man who taught her how to play the drums, and who also played most of the drum tracks on her debut album — died of a heart attack at the age of 54. The soundtrack album is dedicated to his memory.

The rest of the film is dedicated to the recording sessions for “I’ll Get What I Want,” which — in its completed version — closes the film.

The DVD release of Mugonka~Romances sans paroles, released in April 2010, comes with a bonus DVD of live-in-the-studio solo performances by Shoko. It also comes with the PV for the song “Namae wo Yonde~When You Call My Name,” the B-side of Shoko’s April 2010 single, “My Sweet Surrender” (which has yet to be released on an album).

Despite being an independent release on a private record label, Romances sans paroles~bande orginale du film~ charted for one week on Oricon’s album chart, peaking at #205. The album’s single, “I’ll Get What I Want,” did not chart; indeed, it was not even eligible for Oricon’s singles chart, due to being released only on vinyl and cassette formats.

THE SONGS: (Click on a title for a sample, where applicable)

I’ll Get What I Want (Chou Tsuyoki na Onna)

The film’s theme song, and single. A fairly simple tune carried — at first — by Shoko’s piano and a simple drum machine beat, it then is fleshed out with live drums and bass. It also features a whole bunch of cymbal crashes by Shoko. The best song on the record.

A solo live performance, with Shoko on Wurlitzer. Intriguingly, some of the lyrics are in English; the first verse is in English, and some of the later choruses are as well. I like this song to begin with, but I personally think it sounds better stripped of most of its instrumentation like this.

As the title says, it’s an instrumental played on piano. A bit of audio hiss is present, because this was recorded on Shoko’s TC-D5 at home. This track was featured in Mugonka.

Another solo live performance of an older Shoko song, with Shoko playing piano.

Shoko plays Wurlitzer on this live track. I think I prefer this stripped down version to the original found on RadioGenic.

Composed by Bach, whom Shoko spends some time in Mugonka discussing. Another track that was recorded at Shoko’s home on her TC-D5. This recording is also present in the film itself.

One of the few new songs on the record, it was also featured in Mugonka, during the film’s only featured live performance (there are other bits of live footage, but the sound is mostly excised). The track — about the legendary poet Izumi Shikibu, obviously — has not been recorded or released elsewhere.

That is okay, however, because it is an awesome song.

Another live song — featuring slightly lesser sound quality (as it is another track that was recorded with Shoko’s TC-D5). However, it also contains a nice audience pariticipation bit. Shoko is on piano here.

Do You Still Remember Me?

The main B-side of the “I’ll Get What I Want” single, and features Masahiro Takekawa on violin, mandolin and backing vocals. A very pretty song.

I Say a Little Prayer (Live)

Thus, the CD liner notes are probably in error. Regardless, it’s still a great song.

I’ll Get What I Want (Chou Tsuyoki na Onna) (Live)

Footage from this performance plays at the end of Mugonka, though the audio is taken from the studio recording of the song. Once again, Shoko is backed by Masahiro Takekawa and Takeshi Shibuya (the latter providing backing vocals as well).

A pretty track played on piano accompanied with wordless singing by Shoko — again with slightly degraded sound quality because it was recorded at Shoko’s home on her cassette recorder. In the film Mugonka, this track plays after Shoko travels to find her father’s home and business.

BONUS TRACKS (B-sides, rarities, etc.):
One of Us
Heat of the Moment
Mitsumete Hoshii (Take a Look at Me Now)
The three extra B-sides from the cassette single release of “I’ll Get What I Want” (the 45 only had “Do You Still Remember Me?”; the cassette also had karaoke versions of “I’ll Get What I Want” and “Do You Still Remember Me?”). One of Us was originally released by Joan Osbourne in 1995. Heat of the Moment was a top 5 hit for Asia in 1982 (and, personally, one of my favorite songs when I was a child). Mitsumete Hoshii is the Japanese title of the Phil Collins song “Against All Odds (Take a Look at Me Now),” released in 1983.

Saraba Siberia Tetsudo
A cover of a song originally recorded by Eiichi Ohtaki; Shoko’s version appears on the Ohtani tribute album A Long Vacation from Ladies. Universal Music Japan put up a sampler of the album here; Shoko’s track is audible from 3:43 to 4:11.

Romances sans paroles~bande originale du film~ is still in print, and avaiable from most overseas music sellers. The “I’ll Get What I Want” single — both the 45 and cassette single — are only available to residents of Japan through Shoko’s web store. The Eiichi Ohtaki tribute album is also still in print.

Oddball Verdict: Not for everyone, but has many good songs.