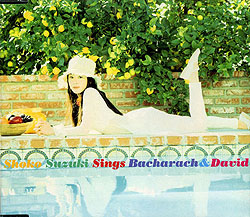 After the struggle of recording RadioGenic, Shoko Suzuki was ready to retire from the music business — even though she was only 28 years old and coming off her most successful year ever as a recording artist. Apparently, the credit for talking Shoko out of retiring is to be given to Takeshi Namura, who had become her A&R director during the recording of RadioGenic. Namura convinced Shoko to go to Los Angeles to record a mini album of Burt Bacharach covers — Shoko, being a big Bacharach fan, agreed to do it. It would also be a chance to take a break from the stress of constantly recording in Japan and pressures from the record company. The resulting four song mini-album, Shoko Suzuki Sings Bacharach & David, was released on June 1, 1994.

The album was produced by Shoko, Hiroaki Sugawara and Namura and arranged by Sugawara, but all of the backing tracks and some of the backing vocals were performed by many well-known L.A. session musicians. Among these musicians were Leland Sklar, Fred Tackett, Bill Payne, Paulinho da Costa (who, amusingly, has a typo in Shoko’s name — it’s spelled “Shoko Suzukif” — on his official web page) and Rick Marotta — Sklar and Payne would again work with Shoko on her Atarashii Ai no Uta album in 1999. Shoko herself handles no writing or musical duties at all, outside of penning a new set of Japanese lyrics for the Bacharach standard “This Girl’s in Love With You.”

Interestingly, Leland Sklar would unknowingly play a key part in the next phase of Shoko’s career — Takeshi Namura had been a professional bass player before he became an executive at Sony; when he told Sklar he was a bass player (as in, no longer a bass player), Sklar responded (paraphrasing): “What do you mean, you were a bass player? A bass player is a bass player his whole life.” This apparently motivated Namura enough to take up the instrument again, which would become a critical part of Shoko’s change in musical direction starting with her next album.

Musically, most of this mini-album is slower, orchestrated pop; only “I Say a Little Prayer” is upbeat at all. The arrangements are, appropriately, a throwback to a 1960s style of orchestration that doesn’t sound much like anything Shoko had recorded up to that point. Shoko’s voice is also in fine form; she even gets to sing in a little bit lower register than she had done in the past, which gives a bit more of an emotional depth to the material.

In addition to returning to recording, around this time Shoko composed a song for the singer Sinon, titled “Umi no Nioi ga suru.” The track was released on Sinon’s album Murasaki Oto, which did not chart.

Even though a four-song mini album of 30-year old songs might not be the most marketable product, coming on the heels of the success of RadioGenic, Shoko Suzuki Sings Bacharach & David peaked at #30 on the Oricon charts, Shoko’s second (and last) top 30 record to date. Apparently re-energized, Shoko also apparently decided the team of her, Hiroaki Sugawara and Takeshi Namura was a good one; they certainly seemed to work well together. Perhaps freed by both the painful experience of recording RadioGenic and going though the healing of those painful wounds in L.A., Shoko made the decision to take her music in a bit of a new direction.

She was going to form a rock band.

THE SONGS: (Click on a title to hear a sample)
Don't Go Breaking My Heart
I believe this was originally released by Dionne Warwick (who, for people my age, will always be known more for shilling the Psychic Friends Network in the 1990s) on her Here I Am album in 1966. It’s a fairly slow, deliberate number with nice lead vocals by Shoko.

I Say a Little Prayer
The one upbeat pop number on the record. The original version was a huge hit for Dionne Warwick in 1967, and has been covered by many artists since then. The track is notable for its shifting time signatures.

Aozora no Kakera / This Girl's in Love With You
The original version of the song — titled “This Guy’s in Love With You” — was recorded by Herb Alpert in 1968. Dionne Warwick later released a version as a single — which reached the top 10 — in 1969. As noted above, Shoko wrote a new set of lyrics in Japanese, her only contribution to the record outside of singing and co-producing.

Make It Easy on Yourself
This track was originally recorded by singer Jerry Butler in 1962. Apparently the track was originally written for Dionne Warwick, who would later release a live version as a single in 1970. Another slower number showcasing Shoko’s vocals against a subdued backing track.

Shoko Suzuki Sings Bacharach & David Digest — A collection of short promotion clips featuring snippets of each song playing over miscellaneous footage of Shoko filmed in L.A. This is available on the SHO-CO-SONGS collection 2 bonus DVD.

A “live” medley of Carpenters hits — featuring Shoko on drums and lead vocals, Masamichi Sugi on guitar and vocals, and Kiyonori Matsuo on piano and vocals — filmed sometime in 1994 (I think). I say “live” because there’s one point where Shoko clearly does not play the drum fill on the backing track; the vocals are probably the only thing actually live.

This mini-album is out of print, but is available on SHO-CO-SONGS collection 2 along with Hourglass and RadioGenic.