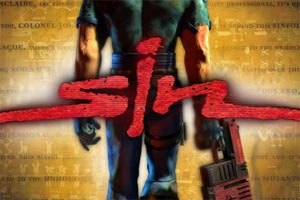 By my own spur-of-the-moment declaration, March is Retro Gaming Month! Since every lame, pointless organization needs their own “official wipe your mouth month” or “official kick the refrigerator” month or whatever else, I figure, why not? The calendar’s plenty cluttered up as it is, and yet I don’t care! So let’s get down to the gory details.

Since my new monitor arrived, I’ve felt strangely…compelled…(note the Bill Shatner histrionics)…to reinstall old games that I bought four, five, or even six years ago. This wouldn’t be so strange all by itself, since Half-Life and System Shock 2 both fall into that category, except that there’s an added twist to keep things really fresh and exciting. When these games were new, I hated them. They were unpolished, or boring, or buggy, or took ten minutes to load a savegame. Now, as if feeling sorry for these bastard children, I’ve decided to give them another chance.

We begin with SiN, a game running on the Quake 2 engine and published in 1998 by Ritual Entertainment. Set some forty years in the future, the game follows the exploits of Col. John Blade and his dorky geekball sidekick J.C. (no, not Denton), who both wisecrack amongst themselves with all the humor and prowess of Unreal 2 guy and his wildly disproportioned gal-pal Aida. This past weekend I reinstalled SiN on my system for the fourth time since 1998, and for the first time ever, I found myself enjoying it.

At first, I wondered why I was suddenly liking this game whereas I hated it so much when it was first released. Then I figured it out. The patches. Since my third installation of the game, several retail patches had been released, and the code was now up to version 1.11. After applying all patches, the game runs much better. The AI actually works, savegames take seconds instead of minutes to load, and there are no more fatal crash bugs and other crap to deal with. Plus, the game is actually great fun, with some of the best sound effects ever to grace an FPS. Refreshing and invigorating!

Why did SiN fail? Because it was buggy as crap. I was actually pretty forgiving in keeping the CD around all these years; most people would have returned it, traded it in or thrown it off a cliff by now. Ah, but now we must ask an even deeper question: Why was it buggy as crap? Because of Half-Life, my friends. The release of that innovative, landmark FPS, which broke ground on many things that SiN was supposed to break ground on instead, caused the team at Ritual to panic. They released SiN way too early. It bombed. Plans for a sequel were cancelled. And it was quickly forgotten. Ironically, at one point in the game, on a bulletin board you see the following note posted: “TOP GAMES: 1. Deer Hunter, 2. Myst, 3. Sin.” Sorry guys—that didn’t come to pass.

Speaking of notes on bulletin boards, not since the last game developed in-house by 3D Realms (which was…gee…Duke Nukem 3D) has there been a game with so many inside jokes and easter eggs. Particularly in the bulletin boards found around the various levels. Each time you see a bulletin board, it’s covered with funny stuff, and it’s always different each time. Apparently the boys at Ritual really liked Army of Darkness too, because there are so many references to that film, it’s absurd. At one point there’s a company memo posted up that reads: “SinTek Notice: Good…Bad…I’m the guy with the gun.” It’s totally ridiculous, but it made me laugh out loud. Then there’s the missile silo computer login password of “ash_housewares”, the guy on the phone who talks about the tenth AoD sequel being in theatres, and on and on.

Perhaps most humorous of all, one bulletin board contains a newspaper clipping announcing Duke Nukem and Lara Croft getting married. “DUKE TO BECOME MR. CROFT,” reads the headline. Yeah right!

I’ll write further articles on my other retro gaming experiences as the week rolls on, but up next on the docket are Blood II: The Chosen and Shogo: Mobile Armor Division. Being the first two introductions of the then-new LithTech engine technology, both are games which I bought new and hated, but which are reputed to be much improved by many years’ of patching and hotfixes. I guess I’ll be finding that out for myself.

Hey, don’t blame me for being weird. I’ve got to play something while I wait for Painkiller to be released.