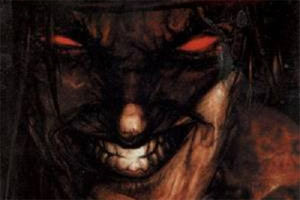 The second installment in my impromptu Retro Gaming Month commentary features Blood II: The Chosen, one of the premiere games running on Monolith Productions’ brand-new LithTech Technology in 1998. The first game I remember playing from this development team was Blood, the original, in approximately 1996 sometime. Running on the Build engine (of Duke3D fame), the first Blood (no, that’s not a Rambo reference) was a shooter set in a horror sub-genre. Taking place in the 1920s, the game dropped you into the shoes of Caleb, who was some kind of undead cultist, returned from the afterlife to liquidate the cult’s dark god and take over the world by himself. Something like that.

Next to Duke3D, Blood is my favorite Build-engine game. It had more creepy atmosphere than any game I’d played since The Legacy: Realm of Terror. So, naturally, I was excited to get my hands on the sequel, hoping it would be still more of that great horror/action/dark humor trio, imbibed with modern 3D graphics and hardware acceleration. Unfortunately, I was sadly disappointed. Blood II was an unpolished, buggy, unexciting, unfunny mess.

Fast-forward to last night. With the game already reinstalled, I set about applying the patches. There was so much stuff changed, the version number was 2.1 by the time I got finished. After that, I configured my display settings and launched the game.

The game menus were nicely done. I bound my keys, set up other miscellaneous options, and jumped into a new game. Ick. That’s why I stopped playing this game. That thought went through my head in the first five seconds. The models are atrocious—blocky, with horribly blurry textures, and stiff, unnatural animation. The weapons were lame, looked even lamer, sounded worse, and had no reload capability (for ultra old-school action). All of this could have been forgivable if everything else about the game was good, but sadly, it wasn’t.

The level design is crap. As you walk through the levels, everything around you looks like you’re viewing it with your eyes squinted half-shut. Almost every texture is blurry. There are signs and such all over the place, but you can’t even read most of them at all because they’re so low-res. This makes having them there in the first place rather pointless—even the Build engine had texture scaling capability that would let you post up signs that were still readable by the player!

The sound effects blow. Whereas SiN had some of the best sound effects ever to grace an FPS, Blood II has the opposite effect. All of the NPCs talk with the same grating, extreme New York accent. The weapons sound like someone farting, burping, or popping cells of bubble wrap. Only Caleb has decent voice talent, and that’s probably only because they got the same guy who did his voice in the first Blood. But even then, the lines he was given to read are so pathetic and devoid of all humor, it really ends up being for naught.

Did I mention the AI yet? It’s beyond crap. The enemies either shoot you with impossible accuracy the moment they see you (forcing you to run around every blind corner with your weapons already blazing), or they come running at you, not firing, and let you paste them on the wall. Blood splatters stick to thin air, floating above the tortured bodies of these people, whose character models are even worse-looking than the original NPCs in System Shock 2.

Speaking of NPCs, their AI is even worse. All of the game’s various non-enemy characters seem to be scared to death of Caleb, which makes sense I guess, since he’s a dead guy, but they apparently don’t realize this until about thirty seconds after he’s shown up. They all just stand around while you chat with their bad New York selves, then suddenly, they put their arms over their heads and run away—except the AI / collision detection / whatever is so bad, they just run in place indefinitely. Meanwhile, their faces are the ultimate picture of boredom, and their arms are not even waving, just sticking straight up like a damn NFL goalpost. Looks like a bunch of performers in a Cirque du Soleil show.

The very last bastion that could make this game good—the setting and atmosphere—are sux0rs too, unfortunately. Gone is the cool 1920s-era setting, with its run-down buildings, blood-stained hospital floors and creepy old mansions. Gone are the quiet nighttime levels, populated only by chirping crickets and the cold swirl of winter wind around you. Instead, you find yourself pounding the pavement in a futuristic city (probably New York; that would explain the accents at least), which just does NOT fit with the whole storyline, I’m sorry. It’s like a couple of classic storybook characters were transported from the 1800s into 2050 Los Angeles, and the audience is supposed to find it dramatic instead of hilarious. Sorry! Not working!

But, for all this, the game is still on my hard drive. During the last few minutes of play, it started to get a little more insteresting. I found myself in some sort of run-down tenement, all bricked up and with yellowed wallpaper peeling off the walls. Dead bodies lay strewn about, their corpses still filled with knives. (Thought that was a nice touch.) And the new enemies I’ve just started to encounter, these weird zombie-like fat guys who appear to be Frankenstein’s Monster-like reanimations of undead criminals (complete with prisoner numbers on their shirts), are more interesting than the blokes from the Bronx, to be sure. Additionally, the double-barreled shotgun—while it looks as bad as all the other weapon models—is quite fun to use, especially when you hit the right mouse button and unload both chambers into the fat sap who’s shambling toward you.

I’ll keep Blood II around for a while longer and continue to give it the benefit of the doubt. But one thing’s for sure: this game has not aged well. Actually, what am I saying? It was awful-looking when it was brand new. I guess that goes to show you how far the LithTech engine has come, since this same technology has given us such greats as Aliens vs. Predator 2 and the NOLF series!