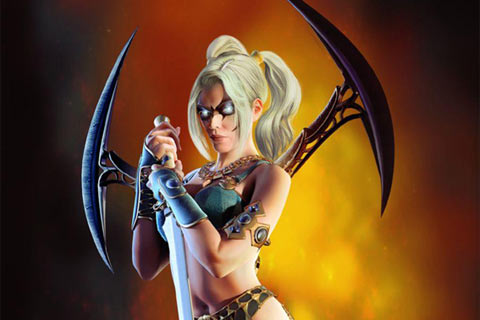 My friends will tell you that I’m not much for medieval PC RPGs like Neverwinter Nights and Morrowind. I’m more of a mainstream FPS gamer who likes your run-of-the-mill Dooms, Half-Lives, and all that other crap. But even I can get into a good medieval RPG if it’s accessible enough, and that’s where Sacred comes in.

Sacred, by German developer Ascaron, is an RPG for the masses. It approaches gameplay in a manner very similar to Dungeon Siege or Diablo, which means that everyone and their mother can figure out how to play this game without much trouble. At the same time, it’s a stunningly pretty and graphically rich little number, with a very good English translation (none of the usual “Engrish” hiccups), very good voice acting, addictive gameplay and mechanics that are easy to grasp. If you have a hard time figuring this game out, then “there’s really something wrong with you and you’re different and strange.” (Quoth the Doom II v1.666 post-game splash screen.)

I’ve only just begun my quest in Ancaria (the name of the gameworld), but I’ve got a good taste for the game already and I can tell that there’s going to be a huge replayability factor due to the way the characters are set up. I’ll touch on some of the stuff I’ve learned along the way, as well as submit to you a gallery of screenshots I took during my last session. Hopefully all of this will aid you in deciding whether Sacred is a game you want to spend your hard-earned dollars on!

You begin the story mode by selecting a character class. There are six classes available to you: Gladiator, Seraphim, Wood Elf, Dark Elf, Battle Mage, and Vampiress. The Seraphim and Vampiress are particularly interesting, as I’ve never seen this type of character done before in this genre. The Seraphim is a beautiful angel of heaven, a legion sent down by the gods themselves to thwart evil with their Heavenly Magic. The Vampiress needs no introduction—but hers is a very unique character indeed. By day she takes the form of a knight, but as darkness falls can transform into a vampiress who can leech lifeforce from other living things and even turn enemies to her side with a deadly kiss. (This is where the replayability comes in—trying the game with a variety of different characters is sure to be worth your while.)

The world of Sacred, Ancaria, is huge. It will take you a very, very long time to explore all of the gameworld. After completing the entire series of training quests, which took me almost an hour and a half, I noticed I had experienced less than one-half of one percent of the gameworld. Reports from players who’ve had their hands on the game a bit longer say that there is an unbelievable amount of room to explore.

I decided to choose a Seraphim as my first character. My only gripe with the game occurs here: There is absolutely no modicum of visual customization that you can do to your character, aside from changing his/her name. But it’s really a minor issue. Anyway, in the beginning, you’ll take up a couple of “training quests” that get you familiar with the game. These quests are different depending on the character class you choose. These quests have the nice side-effect of better equipping you for battle once you approach the main story quests. You get familiar with enemies, weaponry, attack styles and leveling-up. So by the time you’re ready to take on some real foes, you’ve got a real working knowledge of just about everything. This is great, because you don’t wander headlong into a huge battle before you know you’re ready. You can skip all but one of the training quests, though, if this is your second or third time through.

The interface is very much like any other RPG you’re used to. I most closely compare it with Dungeon Siege, since that’s the only other such game I’ve played and really enjoyed. You’ve got slots for all kinds of armor and clothing that your character can don. You’ve got a backpack where you keep your stuff. But you’ve also got some new things—“Combat Arts” and “Combos.” This is where Sacred is really innovative. Combat Arts are basically special moves that you can do. Think of this in terms of a fighting game, Street Fighter or Soul Blade for example. The Combat Arts are special feats, like Ryu’s Shoryuken or Chun-Li’s whirlwind kick. The Combos are just what they sound like—combinations of attacks and special moves that have a devastating effect on your foes. Combos must be “taught” to you by a Combo Master, someone who has mastered a particular combo.

Now, on to the graphics. The visuals in this game are quite pleasing to the eye, and they don’t eat up too much processing power either—in other words, you won’t be paying heftily for all the eye candy. The game is fixed at 1024×768, and is played in the third person perspective with a variety of zoom levels, so it’s quite a bit like Dungeon Siege in this regard. Here’s where we get to another thing that irked me, though. It’s something you get used to quite quickly, but there doesn’t seem to be a zoom level that’s just right. You’re either in just a little too far, or out just a little further than you would like. You may find yourself switching zoom levels often. But that’s not so bad—it allows you to see a broad range of the game’s visuals from different angles. I don’t really mind, in the end.

The characters are quite well done, and the combat effects are great. (The Seraphim, in particular, is quite, uh…pleasing to the eye, especially in that royal blue…rather brief…outfit.) What’s really cool here is the constant transition between night and day. You have a little sundial-like thing at the bottom of the screen that represents the approximate time pictographically. Fog rolls in off the water, and at night, crickets chirp quietly in the background, and lamplights burn along the cobblestone streets of town.

There are some other things done in this game that I haven’t seen in others of the genre. For instance, the number of “quick slots” you can have to store weapons and Combat Arts for easier access depends on what level your character is. You’ll notice in the screenshots (link at the end of the article) that I have two slots for weapons and two for Combat Arts. I started with just one each, and presumably you can get even more as you level up.

Additionally, the game includes the added dynamic of blacksmiths. You can take a sword or piece of armor marked as upgradeable to a blacksmith, where you can use the blacksmith’s “arts” to upgrade that item. This adds attack or defense bonuses, or even fire/magic/poison damage or defense bonuses, as well as other things. Even better, you can take a ring, amulet or other piece of forged jewellery with similar powers, and have the blacksmith integrate them into your weapon or armor for a combined bonus. It’s really quite interesting, and experimenting with different combos is fun. As usual, merchants abound, from whom you can purchase such rings or amulets (not to mention weapons and armor/clothing galore), or you might get lucky and find them in one of the hundreds of little “magical hiding places” scattered around the map.

Sacred adds the ability for your hero/heroine to ride horses, which is quite fun and a great way to get around in less time than it would take to walk. (Plus, it’s fun attacking goblins from horseback, especially since your attacks seem to quicken while in this position!) Speaking of attacks, the U.S. version of the game has been censored, strangely enough, so that there is no blood, dismemberment or decapitation (all of which is present in the European version). Supposedly if you alter the config file you can enable the gore even in the U.S. version, but I’ve had mixed results with this that I won’t get into here. Suffice it to say, the hack should work, but it may not work in 100% of circumstances.

The only other thing I’ll mention, as caveats go, is the 1.5 patch—don’t download it. It’ll screw the game over royally, and the manner in which it does this seems to be different for almost every installation. I don’t know what Ascaron did, but the patch is a horrible beastie that should be avoided at all costs. That’s all I’ll say.

I think I’ve prattled on enough now—I’ve really not spent too much time with the game yet, but I can tell it’s going to be quite a lot of fun. So if you even remotely enjoyed Dungeon Siege, or even if you’re more a die-hard Morrowind type of guy but wouldn’t mind a little lighter diversion, pick up Sacred. It should keep you busy for a good, long time.