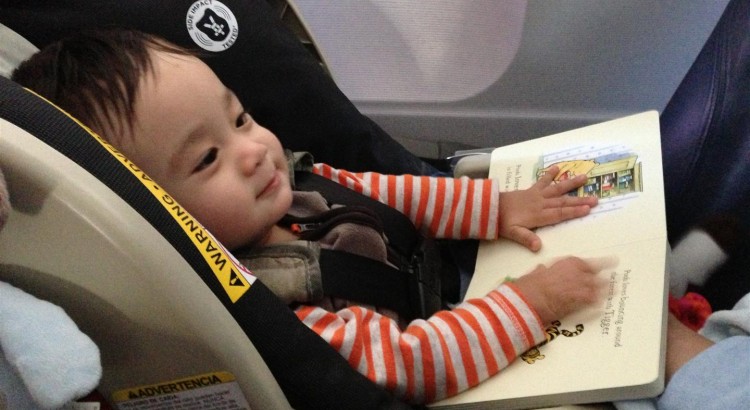 I’m going to try not to let this go to my head, but our son Connor apparently has no trouble flying around. In an airplane, that is. Most of us have experienced the shrieking and unruly baby on one flight or another, and now that the shoe is on the other foot, I was dreading the possibility of experiencing it up close and personal. Not to mention having all of the other passengers staring bullets at me as if to say, “Can’t you do something about him?” In the end, though, I didn’t have to find out what that would be like, because Connor was a prince for the entire journey both to and from Michigan last week.

We had quite a bevy of stuff to take with us this time — two suitcases to check, a stroller, a car seat, two handbags and a backpack. Watching my wife and I trying to jackass it all around the airport by ourselves was probably a slice of comedy; thankfully we didn’t have to go very far with it all, thanks to curbside check-in, my dad’s help and some other mitigating factors. That was rough enough, but the great unknown of “How’s Connor going to behave on this flight?” was never far from my mind.

I was astounded by the fact that Connor didn’t seem to mind any of it, at any time, ever. Although he certainly has his moments of impatience — usually when he’s hungry, sleepy or both — he mostly just spent the trip looking around at all of the wondrous things that surrounded him. Either that, or sleeping. He napped for about half of the flight to Detroit, and almost all of the flight back to Dallas. The only time he started to get a little cranky was when we sat on the ground in Detroit for an extra 20 minutes past our departure time, waiting for a late connection to bring our flight’s final passenger to us. Once we got rolling, Connor was out like a light — probably due in no small part to the fact that it was past his bedtime.

In fact, although there were a lot of moving parts to this excursion, they all performed their appointed duties without question. To save money, I utilized a web-based parking reservation system that Dallas’ local hotels participate in, rather than pay the near-$20 per day that DFW airport charges for parking. We simply drove to a hotel a few blocks from the airport and were shuttled right to our terminal; on the return trip, a phone call to the hotel brought the shuttle back to us within 10 minutes. It was all very smooth and about as trouble-free as you could possibly expect.

We’ll very soon be getting a chance to do all of this again, as we’re going to Disney World for Connor’s first birthday in just a few weeks. The flight is about the same duration, and I’m sure we’ll do the same thing with parking. It’ll no doubt be a chance for us to see whether Connor’s excellent behavior persists.

Speaking for myself at least, we had a great time in Michigan this year. The weather was mostly quite good; just cool and crisp enough to be a wonderful respite from an entire summer’s worth of heat that we’re just coming off of here in Texas. In fact, we seemed to bring the Michigan weather home with us, because it’s been a very unseasonal 55 degrees ever since we returned. This is actually welcome, because after months of temperatures in the 90s and 100s, you tend to feel ready for some chilly weather. (We’re supposed to get back to the 80s later in the week, though.)

My wife and I also enjoyed the heck out of our new iPhone 5s during the trip; we deliberately refrained from syncing a lot of stuff to them so that we’d have plenty of room for photos and video. I also made use of the new panorama feature in iOS 6, taking a few great shots of the vistas of Greenfield Village at The Henry Ford, an old favorite historic destination that I hadn’t been to in years. My wife is enjoying the iPhone (and its LTE data connectivity) so much that she decided to finally join the big leagues and upgrade to AT&T’s 3GB data plan, leaving behind her paltry old 200 MB plan once and for all. (Although I’m disgusted to report that AT&T accidentally deleted her 200-message texting plan at the same time, and since it’s no longer available to new customers, we’ve had to open a support case to get it back. If you ever need to make changes to your AT&T account, I suggest you do it via their website and leave the element of human error off the table.)

Of course, above all, it was great to finally see my family and friends again and introduce Connor to all of them. My parents have an absolutely lovely new home since we last visited; it’s quite a departure for them (and for us!) since until now they had been living in the house that both I and my dad grew up in. The new place is actually a condo, but it’s in a great community that seems like just the right mix between “management” and “freedom” if you know what I mean — it didn’t seem to convey the sense of utter sameness and iron-fisted code enforcement that our former home in Florida did. It’s also in a much nicer part of town than our old Michigan digs, which were a few blocks from the Detroit city limits.

There was also time to get together with my old high school friends Pooch and Forster, and although we might typically play video games during our meet-ups, this time we played tabletop games. There was time for a round of Castle Ravenloft and Lords of Waterdeep, the latter of which I now count among my favorite games (and not just because I won). Fortunately, I’ve already caught up with my tabletop gaming friend back in Dallas who informs me that he just played his first game of Waterdeep as well, and liked it so much that he bought a copy. Looks like I might get to play that one again as early as tomorrow over lunch! (The idea is to shorten the game by a couple of rounds to keep the time manageable.)

It’s funny, too, how Michigan always seems to reawaken the feelings and opinions that I’ve had about driving, cars and urban decay that have always been a part of me. Seeing so many domestic cars on the roads and listening to so many friends and family members talk about the auto industry and their roles in it, it reminds me of how much I used to be disgusted by foreign cars. Seeing the struggle of those who work for what used to be known as the Big Three really adds a whole new, very human dimension to the question of personal automotive choice. We got to ride in (and drive) a variety of late-model American cars while visiting Detroit and I was very impressed with all of them, particularly the 2011 Dodge Charger R/T that my dad currently sports around. I’ve quietly moved the Charger up toward the top of my list of models to investigate when it comes time to replace my wife’s Mazda 6, which we hope will happen in the next year or so.

As for the urban decay angle, Detroit’s got it in spades if it fascinates you. Since I prefer my urban exploration to be completely free from risk, I’m usually satisfied with absorbing the photos and videos shot by others, and I certainly wasn’t about to go into Detroit city just to look at a few broken windows and collapsing buildings. However, even in the more affluent outskirts of the city you can still find certain examples of abandonment, none more prominent than the former Northville Psychiatric Hospital on Seven Mile Road. I managed to snap one picture as we drove by. I’d love to explore around inside, but given the danger (and illegality) of doing so, such an excursion will have to take place in an alternate reality only.

And although I do have a (perhaps unhealthy) fascination with abandoned buildings and what-not, it was actually the trip’s more cheerful notes that are most memorable: visits to old familiar places and getting acquainted with new places alike. We had dinner at some favorite restaurants (including one that I thought had closed down!), tried some new eateries, and enjoyed some home-cooked meals as well. Through it all, I was eminently glad that I had not brought any work to do (or a computer with which to do it), and was thus able to enjoy the trip for what it was: a vacation.

Despite the occasionally depressing reminders of what once was and what will never be again, this was probably one of the best trips back home to Michigan that I’ve ever taken. I’m already looking forward to the next.

I’ll leave you with a small gallery of photos from the trip, including those Greenfield Village panoramas I mentioned.

One thought to “A Traveling Success”