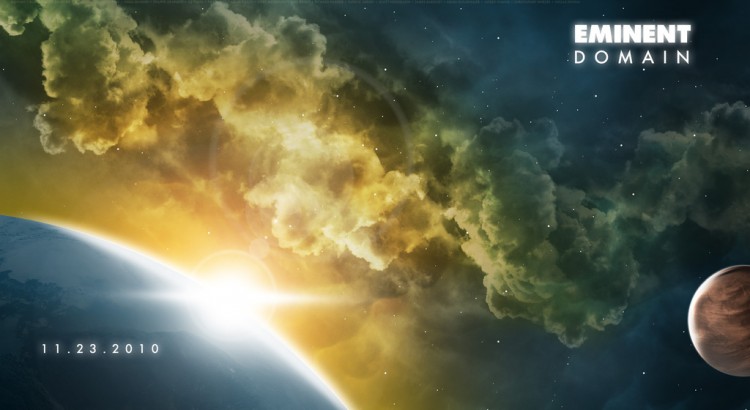 I’ve always been a huge fan of sci-fi, cyberpunk and space exploration themes, much more so than the traditional fantasy settings involving elves, orcs and dragons. So when it was suggested that we play Eminent Domain over lunch I was naturally very excited. Although the name might have you believe you’re about to partake in a game of governments seizing control of old ladies’ houses to make way for a new big box stores, it’s really about empire expansion in uncharted regions of space. Right up my alley.

Eminent Domain belongs to the deck-building genre of games and is among the more accessible deck-builders I’ve played, with relatively simple rules. We set up a four-player game over lunch, with two of the players (myself included) being newcomers to the game and the others having played only a few times. In addition to the game’s base set, we also added the expansion set Escalation which adds new technologies, more role cards, and optional scenarios that give each player their own set of unique dynamics. This was the first time any of us had played with the expansion, and we decided to go for broke and utilize the scenarios right away.

The goal of the game is to have the most victory points (called “Influence”) when one of the endgame conditions occurs. This can be when the last victory point token is claimed, when two of the five role stacks are depleted, or when a player purchases the lone technology that affords an immediate victory. Until that time, everyone is doing everything they can to build their empire, colonize planets, add ships to their fleet, buy technologies and produce resources — any and all of which can earn you victory points.

Actions and roles are the central mechanics of Eminent Domain, and both are played largely via the same sets of cards. Your deck consists of cards with types such as Colonize, Warfare, Research and Survey. Each card has an action on it, and a role benefit. When you play a card during the action phase of your turn, you take the action printed on it. But when you choose one of these card types during the role phase, you become the “leader” for that role, and can play as many cards of that type as you have in your hand to “boost” the role effect. In addition, every other player then has the opportunity to “follow along” with your role and reap some of the same benefits, but to do so, they must be holding at least one card of that type.

Roles allow you to survey new planets, colonize and settle worlds, construct ships for your fleet, research new technologies, produce resources on your settlements, and trade resources for victory points. This is where the strategy comes in. What’s the best “engine” you can construct to produce maximum victory points? Is it colonizing as many planets as you can? Building warships as fast as you can? Researching as many new technologies as possible? We had players in our game who were each in pursuit of one of these goals, but in the end, one of us beat the rest to the punch. But it was a close game: by the time the winner had built enough ships to purchase the game-ending “infinite influence” tech, I was only three influence tokens away from purchasing it myself. (This special technology can be purchased either with 3 huge warships or with 12 influence tokens.) As the scores were so close together all around, it helped the game stay exciting right down to the end.

I was personally quite impressed at how all four players took a unique strategy toward the game, even we newbies who had to learn as we went and recognize the strategies early on. After we played, the winner (who was also the owner of the copy we were playing with) explained some of the common strategies and “engines” that typical players find. It turns out I gravitated towards what had been the most common strategy when the base set first came out: that of colonization first and foremost, followed by resource production and then trading those resources for victory point tokens. I was, in fact, the only player who had any tokens at the end of the game; there are other ways to score those points and the tokens can be avoided altogether.

To wit, another of our players was going heavy into research and buying lots of technologies. These were changing his game in all sorts of ways, allowing his cards to be played at unusual times, allowing his planets to generate resources they normally couldn’t, and more. In the end, he wound up with two more victory points than me despite having no tokens at all.

The eventual winner began the game with the most unusual scenario, but ended up making it work to his advantage by transforming it into an impressive engine for starship construction. He had very few settled planets and effectively zero resources, but amassed a huge array of warfare cards and icons which allowed him to build, build, build ships like there was no tomorrow. Coupled with his scenario’s whopping six technology cards, each of which gave him an additional action when played, he was eventually able to chain some crazy combos to play as many as five or six actions per turn, when the rest of us were taking only one. As such, his game started off slow, but accelerated on a logarithmic scale until he captured the win.

Along the way, you’ll be impressed with Eminent Domain’s attractive art and high quality components (if you recognize the ship models, they’re from Eclipse!), but much of this is unique to the Escalation expansion so I highly recommend playing that version of the game for the best possible experience. The only trouble is that this game might be hard to come by. Both the base set and the expansion were Kickstarted, the base set over a year ago, and publisher TMG believes in a Disney-like “put it in the vault” business model where games are produced and sold in a limited run, then go out of print — perhaps to return for another run later, or perhaps not. It’s very much like the Japanese approach to books and CDs and such, at least from what I remember of dabbling in anime merch in the ’90s.

Overall, I had a blast with Eminent Domain and I can’t wait to play it again. Fortunately it does well even with two players — fortunate because nearly half of our gamers guild will be spending the next 45-60 days in China and we’ll often find ourselves reduced to as few as two players. Fortunately, the other remaining guy is the one who owns Eminent Domain and he also plays tournament-level Android: Netrunner (which I also reviewed here) — another one of my favorites — so I’m sure we won’t be bored!