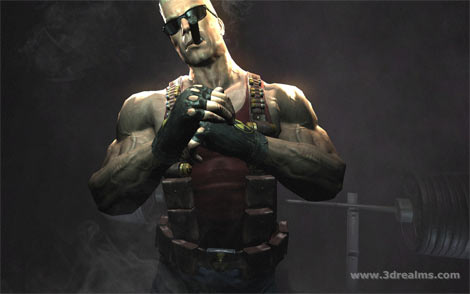 Barely more than a week after eulogizing Pontiac Motor Division, I’m back again to say “Sayonara!” to another staple of my formative years: game development studio 3D Realms, formerly known as Apogee Software LTD, makers of Duke Nukem 3D. Yesterday, in a sudden announcement that has taken the world by surprise — and has even rocketed to the top of BBC News’ list of most popular stories — it was revealed that 3DR was “shutting down” by the end of this week due to a lack of funds. All of their employees have already been let go.

All throughout the ’90s, Apogee/3D Realms gave me plenty to do. From publishing the iconic Wolfenstein 3-D to developing witty shooters like Duke and Shadow Warrior, the company’s games always topped my “must-have” list. I famously spent the entire holiday seasons of 1994 and 1995 waiting, respectively, for the release of Rise of the Triad and Duke3D. While ROTT was a bit of let-down for me, the critically-acclaimed Duke3D fully redeemed 3D Realms, and kept me occupied for a record-breaking two solid years of fun. It became a source of pop culture in-jokes, woven into practically everything I created in 1996 and 1997. I played countless head-to-head modem games (“Dukematches”) with my high school friends in the off hours. The game was an epic success around the world.

My friend Reaper and I were even creating our own respective takes on our high school in Duke’s level editor — his featured the infamous auditorium rocket launchers that you had no chance in hell of escaping, while mine sported a hidden “war room” off the cafeteria where school officials could keep watch for troublesome parents who had come to question the administration’s insane policies. Ah, those were the days.

Following the incredible success of Duke3D, 3D Realms — whose tagline was “Reality is Our Game” — first revealed news of an upcoming sequel, Duke Nukem Forever, in late 1997. Somewhere, I still have the issue of PC Gamer whose cover sported the exclusive announcement, which I picked up from the local Egghead Software on my way home from school one day. (Count the anachronisms in that sentence, why don’t you!) Duke Forever, or DNF, was billed as a revolutionary shooter that would essentially be the best game ever made. Fresh on the heels of Duke3D, everyone was taking about it — and hotly anticipating it.

Unfortunately, a ridiculous 12 years later, we now know that DNF stands for nothing more than “Did Not Finish.” The only thing finished here is the now-defunct 3D Realms.

Similar to the death of Pontiac, I find myself not really surprised at this outcome. Since 1997, 3D Realms has developed and produced nothing. Oh sure, they’ve published and funded a variety of titles; everything from Max Payne to Prey to the various Duke Nukem spinoff games. But these were all developed by other studios. And now I realize that I, like my friends from high school, had long ago reached the point where I stopped expecting Duke Nukem Forever to actually arrive. I thought it would be a cool bonus if it did — like the resurrection of someone who you thought was dead — but I was no longer watching the forums for news or counting days on the calendar.

It didn’t help that in all this time 3D Realms released no media, no screenshots, no information: nothing. In fact, their total media blackout and mantra of “Release Date: When It’s Done” became infamous in the gaming industry. In the mid-’90s, this attitude — when applied toward Duke3D — seemed quaint and vaguely awesome, like “Yeah, you guys make the most awesome game you can make, and fuck deadlines!” But after 12 years, we fans have all grown up and now it just seems like an excuse to slack off and not get any serious work done.

There are even some stories floating around the web — some put out there by ex-3D Realms employees — that the entire concept of Duke Nukem Forever, from the word go, was a marketing stunt meant to create the most legendary idea of a game in history, which would boost PR and profits for everything the company touched in the interim. If that’s true, it worked — for a while. And then the recession came, and the money creek just plain dried up.

In the end, what I’m saddest about losing is the modern-day link back to one of my happiest memories of the ’90s: That of an awesomely overbearing computer game hero and his penchant for kicking ass and saving the world from alien invasion. A fond retreat from what were then the torturous days of high school rigmarole and petty social bullshit. And even if none of us thought 3D Realms would ever finish Duke Nukem Forever, it was comforting, somehow, to know that they were down there in Garland, TX, still plugging away, making the the most awesome game they could make, and fuck deadlines.

But now they’re gone, and we’ll have to make do with our memories…and our copies of Duke Nukem 3D for Xbox Live Arcade, of course, which I intend to play with those same high school friends of mine this weekend. It shall be a fitting epitaph.

Hail to the king, baby.

3 thoughts to “Bankruptcy Is Our Game”