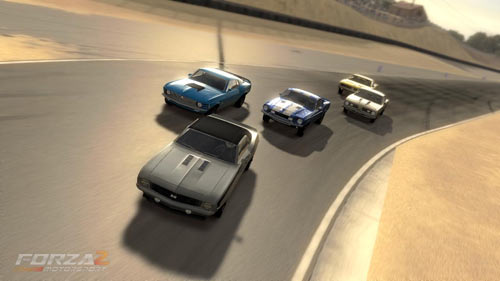 First of all, sorry for posting a big thing about “My Vacation: Day 1 OMGBBQ!!!!1” and then promptly falling off the face of the earth. It wasn’t because our vacation sucked; it’s just that the Internet service at the hotel proved to be too flaky to continue paying for, so we didn’t. We had loads of fun, and I feel quite refreshed and ready to get my head back in the game. And speaking of games…what a segue. Today’s post is about Forza Motorsport 2, the racing sim just released for the Xbox360.

Because visual aids grab attention better than words, allow me to lead off with one:

Forza 2 is the second in this racing game series that’s exclusive to Xbox, and the first on Microsoft’s current-gen Xbox360 console. The answer to Sony’s elder Gran Turismo, Forza combines the same sort of freeform driving gameplay with an almost obsessive-compulsive physics engine. Whereas GT takes the prize for the sheer number of cars it offers, Forza focuses more on driving physics, realistic vehicle damage, and even a comprehensive tire model developed in parntership with Toyo.

I spent some time with the free downloadable demo of Forza 2, getting used to the handling and physics, before deciding to buy the full game on Sunday. Since then, I’ve been stepping through the ranks, buying better cars and tuning those already in my garage. I feel that I’ve made a lot of progress, but when I talk to other players who have had the game a little longer, I find they’re far beyond me already. Unlike in some other games, though, I don’t feel like I’m languishing — I’m getting a lot of rewards, learning new stuff and opening up new challenges almost every time I win a race.

That, I’m convinced, is the thing Forza 2 does better than anything else. It keeps stringing you along, making you want to play more. While I like driving games, I tend to get bored with them easily — invariably because I run out of things to do, it gets too hard to make progress, or I see everything there is to see. Forza paces you as you progress, unlocking more and more races, cars and capabilities as you go, but at the same time it gives you a healthy range of choices at the onset, too. It perfectly balances instant gratification with the need to work for better and better things.

When the game starts, you’ll choose your home region — either North America, Europe or Asia. This determines the prices and availability of the cars you can buy, as well as the rarity of certain models. For instance, I chose the North American region. A large slate of domestic models was available to me right away (including classic muscle machines), but many of the European and Asian cars were locked — and more expensive. As I won races, I entered into partnerships with domestic automakers and suppliers to the point where I landed a 30% discount on any domestic car, plus discounts on certain parts and upgrades from suppliers like GM Performance. My ’68 Shelby GT-500KR, while a rare beast, isn’t as rare as — say — a Nissan Skyline R34, which was never sold in the North American market. If I’d chosen Asia as my home region, it would be reversed.

Speaking of my Shelby, I call it Rally Vincent’s Revenge:

I added the stripes myself in Forza 2’s Livery Editor. More on that in a minute.

In the game, the actual art of driving is handled quite well. It’s a pretty realistic physics model, while at the same time being easy to pick up and learn. You won’t find yourself getting frustrated that you can’t handle the cars properly, even using a standard controller instead of a wireless racing wheel. You can also switch off a variety of driving assists, like ABS, traction control and stability management. The less of that stuff you rely on, the more winnings you’ll earn. I have no trouble handling just about any car with the latter two assists turned off, although I rely heavily on the driving line (it’s a line on the pavement that shows you the optimum time to start braking before entering a turn).

On the customization side, Forza 2 gives you access to a vast array of both performance and aesthetic tweaks for your car. You can upgrade and tune your intake, exhaust, cam, add forced induction, swap your entire driveline (you can drop an LS7 in your Solstice, or a C5.R race engine in your GTO!), redo your suspension and transmission, change your gear ratios, add larger or wider tires, and so on. After tuning, you can easily benchmark (think dyno) your car without even driving it to see what your new figures are, or take it for a test lap to experience the effects for yourself.

On the visual side, the Livery Editor lets you do some pretty amazing stuff. There’s a vast array of shapes, manufacturer decals and vinyls of various designs that you can add to your vehicle, then resize, skew, rotate, distort, color and combine them any way you want. You can also group several of these together and manipulate them as a unit. The result is the ability to create totally custom designs of any type you want, assuming you’ve got the patience. Some players have recreated real-life race cars, like the GTO.R, in nearly exacting detail. Others created their own custom paint schemes featuring Homer Simpson or anime characters, using nothing but groups of primitive shapes (lines, circles, curves, etc.). It’s astounding. Then, if you need cash, you can sell your custom-designed car over Xbox Live for big in-game dollars.

The game’s Career Mode is where I’m spending all of my time. I started off with a set amount of money that let me choose from one of several inexpensive compact cars, and I’ve been working my way up from there. I’ve won several prize cars that have, in turn, allowed me to enter races reserved for certain types of vehicles. I’ve been gifted several free cars from manufacturers like Ford (they sent me that Rally Vincent special gratis, incidentally) and Dodge (from whom a bright orange ’70 Charger R/T arrived at my door). All of this has helped me gain an even higher foothold in the racing world, which keeps me wanting to come back and play some more.

Of course, I had to pick up my own car’s in-game doppelgänger:

How am I getting these screenshots on here? Conveniently, Forza 2 includes a Photo Mode wherein you can take pictures of your car at any time while racing or watching a replay. Afterwards, you can upload your photos to ForzaMotorsport.net and download them to your computer. This is a nice system, but it’s not as good as Gran Turismo 4, where you could just save your photos directly to a USB flash drive. Forza’s website also limits you to five photos at any one time, so once you upload five, you better go save them to your PC before you upload anymore. I had to upload/download the pics for this article in two stages, and it’s a bit of a pain.

My other pet peeve with Forza 2 is the camera angles. They really just suck. Unlike Project Gotham Racing 3 or Test Drive Unlimited, there is (sadly) no modeled interior view that puts you behind the dashboard of your favorite vehicle. Instead, you have to choose from one of four camera views: Rear view, rear view slightly further away (seriously, it’s practically the same as the first choice), hood view, and bumper view. I choose the latter, because otherwise I find it extremely hard to judge distance.

In replays, the camera angles aren’t much better. Like most racing games, there’s an “auto” camera mode where the view keeps changing automatically as you watch the playback, emulating TV coverage of racing events. But even this isn’t very good, and if you happen to switch away from “auto mode,” it can be really hard to find it again — as the angles aren’t labeled. This was all somewhat disappointing, but I got over it pretty quickly.

In short: For driving enthusiasts, or gamers who once loved Gran Turismo but don’t intend to flush money down the commode for a Playstation 3, Forza 2 should be almost exactly the fix you need.

And now, as a parting shot, some more juicy photos: