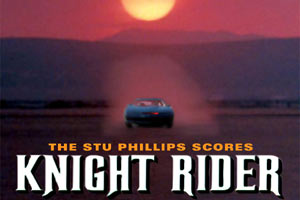 Made it before the long weekend! I received a nice gem in the mail today: an autographed copy of the new Knight Rider soundtrack album: The Stu Phillips Scores. Stu Phillips is the man who created the legendary Knight Rider theme, and who scored the first thirteen or so episodes before Don Peake took the reigns. Having also scored the 1970s TV series Battlestar Galactica (yes, the original one with the chrome toasters), Stu gave Knight Rider the same orchestral treatment, with some synthesized electronic sound mixed in. The result was a very unique set of scores, some of the best of which are immortalized on this new CD.

It’s all here: From a dry mix of the original theme tune, to the complete score for the pilot and four other episodes, act breaks, and even the “Glen Larson Productions” theme bumper heard after the closing credits. The score for “Trust Doesn’t Rust” is also included, which fans will remember as the episode where the interminable legacy of KARR made its debut. The CD is absolutely jam-packed at a running time of 78 minutes, includes full names for each track as well as an extensive insert booklet with liner notes and comments on each track. This is the nicest soundtrack album I’ve ever owned, and I’m incredibly proud of this one.

Now to burn a copy to keep in the Trans Am, and an MP3 disc for KITT too! 😎 All in all, listening to this disc all afternoon was the perfect way to celebrate my first day at my new job, which just kicks all manner of ass. I shall post about that soon, as well.