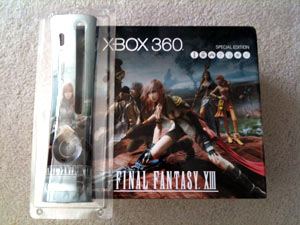 So after my 2006-era Xbox 360 suffered terminal RRoD on Friday night — you may have read about it — I decided to pool together my remaining Gamestop store credit and some cash from a recent side job in order to replace it. In my blog post on the subject, I went into the usual insane amounts of detail (at four in the morning, no less) about the various Xbox packages that were available and debated with myself over which one to get. Eventually, I decided that the $299 Elite was the sweet spot.

On Saturday, however, I decided that the $399 Final Fantasy XIII Special Edition Elite was the sweeter spot. This was mostly decided for me by a quick call to the local Gamestop, when I learned that they not only had just one FFXIII console left, but also the limited edition faceplate to go with it. The faceplate, which was originally intended to be for preorder customers only and is not for resale, essentially solved my biggest gripe with the special edition unit: that it didn’t look special.

Naturally, then, I went down to the store and got it. As a bonus, the store’s best employee was working the register that day. Not only is he not a douchebag and knows exactly what he’s talking about, but he doesn’t try to screw you out of promotions or take forever to ring up a trade-in, as some of the store’s other workers have done. I hadn’t seen him for a while so I wasn’t sure he was still working there. Normally I don’t bother with those Gamestop surveys they always give you on your receipt, but I filled this one out as soon as I got home, because that guy rocks.

Anyway, I unpacked the Xbox and laid it all out, making sure all of the components were in order. The Special Edition bundle came with two wireless controllers, plus a new headset (in black, like the Elite…which was interesting because everything else was white). This made it easy for me to simply retire all of my old equipment — console, power supply, and both controllers — by packing them up in the box my new stuff came in, then tucking it into the closet. I’m pretty absurdly detail-oriented with this kind of crap, so don’t act surprised.

I appreciate the FFXIII bundle’s nice touches, including the Final Fantasy logo engraved on the top of the hard drive (it left no room for a capacity declaration though, I notice); the incredibly detailed artwork on the faceplate and the newer, smaller power supply that’s absolutely dwarfed by the huge honkin’ thing attached to my old Xbox. I should also note that the new system is significantly quieter, particularly the DVD drive, which I believe is of the Lite-On variety. The serial number plate indicates that the box was manufactured in January of 2010, so this is about as new as they get.

Absurdly, even these top-of-the-line Xbox bundles don’t come with HDMI or even component video cables, so I just used the ones I had connected to my old unit. As a bonus, this made setup a lot quicker because I didn’t have to shove myself back behind the RPTV to find the connection points.

On Friday night I ordered one of those Xbox Hard Drive Transfer Kits from Microsoft, but because it’s going to take some time to get here, I’ve attached my original 60 GB hard drive to my new console for now, leaving the 250 GB stuck to one end of my Thai Xbox so it won’t get lost. Thus I don’t get to use all that ridiculous space just yet — trust me, I’m probably going to go nuts and install all the games I intend to play — but it’s just one more thing to look forward to.

I also completed the license migration process, so I can use all the DLC I’ve paid for without needing to be signed into Xbox Live. Because the license for each piece of content you buy and download over XBL is tied to your physical Xbox 360 console, if you replace it, you should transfer those licenses over to the new one. Interestingly, Microsoft’s tool showed that I currently had about 75 licenses associated with one console and 178 associated with another. I can only assume that some of my licenses were still tied to my original original Xbox from 2005. Anyway, they’re all associated with my new one now.

I also had a great opportunity to try out the new unit when I got together with my friend Forster for that belated game of Borderlands — the same one that apparently murdered my last console. This time we enjoyed about a three-hour session with no technical hiccups to speak of. After starting the day with a level 4 character, I ended with one at level 18. The game is such a blast to play that we both decided to buy two of the DLC packs right there at the end of our session: “The Secret Armory of General Knoxx” and “The Zombie Island of Dr. Ned”. (Fun fact: According to Gearbox Software, makers of Borderlands, the game contains 16,164,886 different guns. I believe it.)

Although I mostly spent my time playing Borderlands, I did pop in the titular Final Fantasy XIII for a bit of a teaser session, and was mightily impressed with the visuals, the incredible character designs and — surprisingly — even the English voice acting. I see that there is no option to go with Japanese dialog, which doesn’t surprise me because Square Enix had a hard enough time cramming all of the game’s content onto DVD9 media for the Xbox as it was. This makes it a relief that the voice acting so far seems to be pretty good. (Some say Vanille can be a pain to listen to, though.) I also like the new combat system; it seems like it makes battles very accessible, although granted I have only two abilities at present. I can see myself getting really sucked into this game. Which could be a problem, since I have so many bloody games to play. But of all the problems to have, that’s a pretty damn good one.

It was a great weekend in general, for that matter; I got to hang out at the restaurant where Apple works, got some free sushi (Yum Yum roll FTW) and met a whole bunch of new people, including one regular customer who’s apparently filthy rich but is among the most down-to-earth people I’ve ever hung out with. It was a great evening, and the kind of thing that I’d like to do more often. (See, my much-vaunted social experiment might actually come to fruition here.)

Anyway, I hope that’s the last time I’ll have to worry about an RRoD event for a while. Even if my new Xbox and all of its design revisions can’t save me from a future failure, at least I’ve got a new 3-year warranty that will keep me from paying for it myself. In the meantime, I’ve got lots of gaming to do.