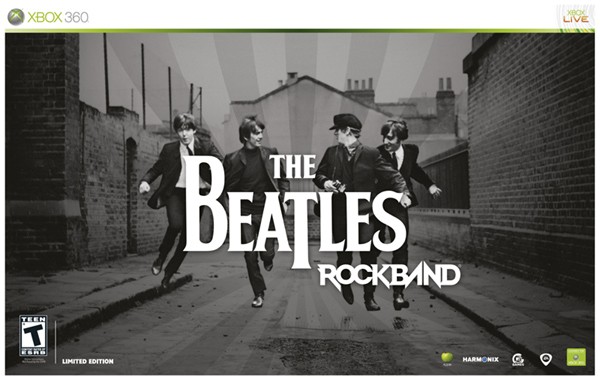 I spent last week (mostly) on vacation in my Michigan home town, where I had the opportunity to get together with my good friends for a rousing day of Rock Band 2. We spent a great many hours jamming on the massive array of songs (many of which were DLC) offered by the game, which all served to remind me of how much fun these music games are. I myself have Rock Band 1 for the PS3, but haven’t played it in quite a while, so I resolved to dust it off once I got back to Florida.

However, as our return trip neared, I hatched a more grandiose scheme: I wanted The Beatles: Rock Band. The full game, complete with Beatle-inspired instruments, runs a whopping $250. But because the instruments from Rock Band 2 are compatible, I realized that I could buy the marked-down Rock Band 2 full game, along with the Beatles software only, and get two games for $160. (Note that I could even have used my Rock Band 1 instruments, but I wanted to platform-switch to the Xbox 360.) So yesterday, after our flight home, we went to Gamestop and picked everything up.

First, a word about the hardware. Coming from Rock Band 1, I noticed a few improvements to the instruments in Rock Band 2. I like playing the drums more than anything else, and I was happy to note that the RB2 drum pads are softer, much quieter and register hits far easier — in fact, they’re almost exactly like the practice pads I used when I was taking lessons many moons ago. The new kick pedal has a much stronger return spring and a vastly improved feel overall, to the point where you can actually rest your foot on it like a normal person. There are also expansion jacks for a cymbal add-on kit, which I’d love to get because it would allow me to use the familiar cross-over pattern for the hi-hat and snare which is used when playing an actual drum kit. Lastly — and this is big — the RB2 drums are wireless, so there’s no frakking around with cables.

The guitar feels mostly unchanged from the original Rock Band‘s simulated Stratocaster, although I noticed it now has a faux-woodgrain finish on the fretboard and is no longer equipped with the largely-pointless on/off switch. It remains to be seen whether this guitar will hold up better than my original Strat, the strum bar of which started to get flaky after only a few plays, but so far it’s working well.

After setting up the instruments, I popped in The Beatles: Rock Band game disc. I should note here that the game comes with two free codes to unlock two Beatles: RB T-shirts for your avatar to wear: One female and one male. Loading up the game, I was presented with a pretty impressive animated opening movie, and then dropped at the colorful main menu. Pumped through my 5.1 surround system, the audio was pretty impressive.

We had a lot of trouble with calibration on our impromptu Rock Band 2 setup in Michigan, but I’m happy to report that the calibration routine on my home system yielded a perfectly playable setup that felt perfectly spot-on. Having never played a music game on my Xbox before — only my PS3 — I was pleased to find that I could actually use my home theater receiver (and thus my 5.1 system) for the game. By contrast, Rock Band 1 on my PS3 lagged so badly over my HDMI pass-through that I was forced to switch to my TV’s built-in speakers whenever I played, and it was annoying.

After calibrating, Apple joined me on the couch and we set aside The Beatles: Rock Band’s story mode in favor of a Quickplay session.

In Quickplay, you simply choose the song(s) you want to play and the difficulty level, then jump right in. Although she is mostly a fan of John Lennon’s solo work post-1970, Apple knows a few of the Beatles’ original songs, so we favored the ones she’s familiar with. I started out on drums, she chose guitar, and we progressively increased the difficulty as we went on. We played favorites like “Something,” “Hello Goodbye” and “Lucy in the Sky with Diamonds,” and they were all a blast.

I quickly fell into a drum groove, and it wasn’t long before I was setting it on Expert Mode and doing pretty damn good. Admittedly, Ringo Starr isn’t the world’s greatest drummer, nor are his beats the most complicated, but they’re lively, interesting, varied and fun, and that’s all I needed. They’re also one other, very important thing: Familiar. Trust me, your performance in Rock Band is greatly influenced by how well you know the material. I’ve been listening to the Beatles since high school, when my friend Pooch introduced me to the Fab Four (and taught me everything else I know about them, trivia-wise), and I’ve been air-drumming Ringo’s work for years. It was great fun to actually drum along with the patterns and fills I’d so often imitated on songs like “I Am The Walrus” and “Come Together.” There is one glaring percussion omission, though: “Strawberry Fields Forever,” the only Beatles song to feature a drum solo (and an awesome track overall). I pray it shows up as downloadable content.

Graphically, the game doesn’t disappoint, with each song accompanied by appropriate visuals of the Fabs rendered in a fairly realistic, yet whimsically animated style. In the Beatles’ early songs, you’ll see them play in familiar venues like the Ed Sullivan Theatre, Shea Stadium and the Cavern Club. Later on, the in-studio recordings from post-tour albums like Sgt. Pepper and Abbey Road are backed with impressive visual “Dreamscapes” that are inspired by the song being played. In my opinion, these colorful and often abstract Dreamscapes are a perfect fit with the style of the Beatles’ latter years. When you finally get to Let It Be, you’ll be playing a virtual rooftop concert. It’s all masterfully done.

Quickplay sessions in particular also come with pre- and post-rehearsal studio chatter from the Beatles themselves, which apparently has never been released before. It’s pretty cool hearing Ringo banging out some warmup rhythms or John commenting on a take before and after you’ve finished a song. Another cool tweak: Songs that normally end with fade-outs are instead carried through to a definitive end, owing to the fact that that Apple/Harmonix went back to the original master tracks when compiling and tracking the music for the game.

We also experimented with story mode, in which Apple decided to flex her karaoke glands (every Asian person has them, do they not?) and pick up the microphone. She actually did quite well on the songs she knew, and I tried my hand at the guitar as our virtual Fab Four embarked upon their career in a reproduction of the Cavern Club, circa 1963. In story mode, you play in different venues while following the Beatles’ career in chronological order. Each venue offers a handful of songs, and if you get a good score while playing them, you unlock photos of the Beatles from that era. Other unlockables include special challenge sets and even things like the Beatles’ 1963 Christmas Album, sent exclusively that year to members of their fan club. While the audio from the album plays, the screen shows you detailed scans of the liner notes and the disc itself. It’s totally gear.

There are 45 songs available in the game (see here for the complete list) and all of them (except “The End” from Abbey Road) are available in Quickplay right from the start. This is different from previous Rock Band games, where only a few tracks could be Quickplayed at the onset, and the rest had to be unlocked by playing story mode. Additional downloadable content is on its way, with the first such track, “All You Need Is Love,” already available for sale. After that, full-album downloads are scheduled for release as follows:

It’s been stated as “unlikely” that any of the Beatles’ solo work (i.e., John Lennon/Plastic Ono Band or Paul McCartney and Wings) will be offered as DLC, largely because of the additional rights holders whose permission would need to be sought, which sucks. However, Dhani Harrison indicated that we should not rule out this possibility, meaning that I should perhaps not yet relinquish my hopes of playing “My Sweet Lord” on a plastic guitar. Regardless, I’d like to see at least a few additional single tracks from the Beatles, or even additional albums, released as downloadable content. And I know this will never happen, but how cool would it be to get DLC of “You Know My Name (Look Up The Number)”?

The Beatles: Rock Band is perhaps the best entry in the relatively new “music genre” yet, and is definitely my favorite — if for no other reason than the band being highlighted is one of my favorite bands, whose music I am already intimately familiar with. Harmonix (and the surviving Beatles and Beatle relatives themselves) really pulled out all the stops in creating an immaculately polished, gorgeous and fantastic-sounding game, which truly is an interactive exploration of the Beatles’ catalog. If you’re even a passing fan of one of the greatest musical acts of all time, this game can’t possibly be missed.

(If money is tight, and you already have instruments from an earlier Rock Band or Guitar Hero game, chances are you can use them. Check here for a handy compatibility chart.)