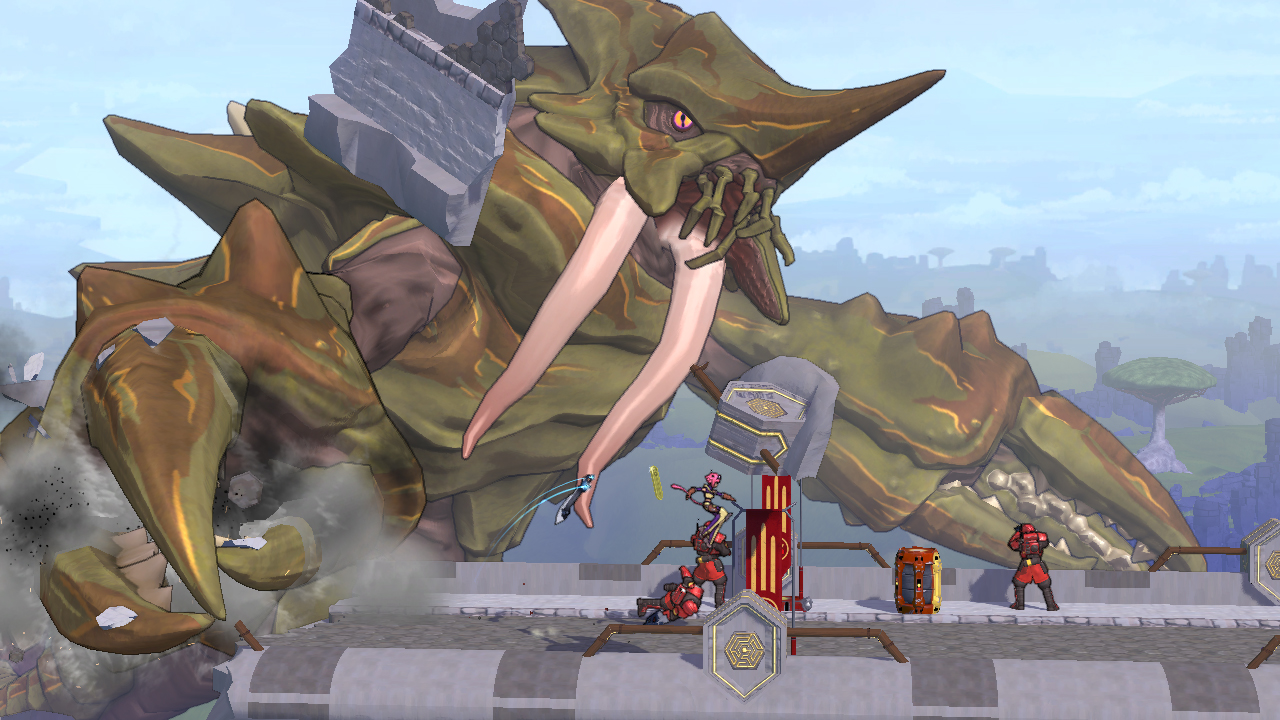 Lately, it’s seemed like the name of this blog — and my nickname “Chief Oddball”, even — has become almost a misnomer. For what, exactly, is so odd about most of the stuff I post these days? Just this evening, my wife was saying that I don’t write anywhere near as many rants, tirades or random goofiness about my life as I used to a few years ago. Most of that stuff isn’t really missed, to be honest, nor do I have much interest in even reading it anymore. Today, though, despite the fact that this post is merely a video game review, I think I might be tipping the scales back toward the “odd” end of the spectrum.

The reason is because the game I’m reviewing today, the Xbox Live Arcade platformer Blade Kitten, is almost universally hated by everyone. At best, the mainstream reviews and opinions I’ve found online view the game as mediocre. At worst, they consider Blade Kitten a mess, filled with clunky and unresponsive controls, horrible and clichéd voice acting, and an an over-the-top art style that rips off every anime stereotype in the most obvious, Western-centric way possible.

What’s odd is that I, meanwhile, find the game colorful, charming and way more fun than it apparently has any right to be — to the point where I’ve put AAA titles like Halo: Reach on hold to bask in its mega fun-ness.

Begin obligatory infodump: Blade Kitten is a 3D sidescrolling platformer, vaguely similar to Super Mario Bros (for you old hats) and Shadow Complex. Based on a webcomic of the same name that was created by one “Space Captain Steve,” its futuristic sci-fi setting follows the exploits of a partially-human, partially-feline woman named Kit Ballard who is like a sort of galactic bounty hunter. The game is partially about hacking and slashing enemies with your floating Darque Blade, but mostly it’s about collecting Hex, better known as money. (Or coins, again for you old hats.)

The game’s art style is a pseudo cel-shaded 3D that most closely resembles Gearbox Software’s excellent FPS/RPG Borderlands, except with brighter colors. Character design is very anime inspired, using all of the typical facial proportions, mannerisms and trivialities at its disposal. Kit’s vaguely valley girl voice is every bit as confident, wisecracking and vain as the moniker implies, and some of the witticisms she blurts out make you wonder whether you should laugh or cringe. (“Win GET!” she occasionally squeals when you find a hidden treasure chest stuffed away in a corner.)

The dialogue of Kit’s primary opponents, the Sols, is usually even more cringe-worthy, with exclamations of “Situation: Oscar Mama Golf!” and “It’s only a girl!” making you want to roll your eyes. In a weird twist of fate, these are balanced by their oft-hilarious shouts of “What the?!” and “Get her, you NOINKs!” which still make me laugh out loud. I’m still not sure whether the game is really that funny, or whether it’s crossed into MST3K territory…but either way, I’m enjoying it.

The cutscenes are actually quite well done, with superb character animation and voice acting that, while at times over-the-top, is actually quite genuine and missing the usual “English dub” affectation of sheer boredom and inability to simulate emotions that drove most of us to subtitled anime long ago. And even though there’s a character (who only rarely shows up) that reminds me of the oft-maligned Jar-Jar Binks, where Jar-Jar made me feel nothing but contempt every minute he was on screen, his counterpart in Blade Kitten — “Hundert Tonne” — is actually quite funny. (If I had to guess, it’s all in the subject matter. You expect wackiness in Blade Kitten, whereas in Star Wars, you want the film to take itself a little more seriously.)

The gameplay is where I really grew to like Blade Kitten. I’ve always enjoyed the classic platformers, from Mario to Sonic, and when I discovered last year’s Shadow Complex I reveled in the modern update of the art form, married to the gun-toting action I eat up from games like Halo and the like. Blade Kitten is much like that; it has you leaping and climbing, jumping down wells and scaling heights in search of the bounty you’re after, but more importantly, in search of as much Hex as you can possibly collect. Seriously, there’s more Hex in this game than there were rings in Sonic. It comes in a variety of denominations from 10 to 1000, and you can use it to buy new blades, costumes, health and stamina upgrades, so it’s not just for scorekeeping. There are also other bizarre treasures to find, like goldfish in plastic bags [!?], data discs and rare bird-like creatures called Skiffs. Picking up any of these nets you — you guessed it — Hex.

Blade Kitten is a very easy game at the start. No, seriously. You’ll walk around casually chopping guys up in the back of your mind while your eyes are busy wandering around for something you can climb, break through or fall down to get your hands on more of that precious Hex. Later on, around the midway point, you start encountering new types of enemies that really keep you on your toes, especially the deadly Darques who come at you in such numbers that you’ll find yourself focusing less on the Hex and more on the running for your gorram life. There’s one particular level where you do nothing but flee from an enormous, towering alien lobster-monster, while it HULK SMASHes the bridge you’re running on. It’s frenetic and fun, and just one example of the variety of ways Blade Kitten keeps things interesting by changing up the level design.

Speaking of level design, although it is much maligned by other reviewers, I actually found it quite alluring. Although the game is, at its heart, a 2D sidescroller made with a 3D engine, there are actually “depth factors” in play. For example, you’ll often see enemies coming toward you from “deeper within the screen”, as it were. In the distance, you can sometimes see other parts of the level that you can reach later, often through the use of a teleportation portal. Each level is different than the one before; in some you’ll traverse a space-dock like setting, others a sewer system, still others the tops of buildings, castles and fortresses. There are also levels where you ride on the back of a vaguely reptilian creature called a Noot, which is probably more closely related to Mario’s Yoshi than anything else. (The music even adopts bongos while you’re on Noot-back.)

The game’s controls have taken the brunt of the bashing from critics; they’re fairly floaty and slow to respond. Kit feels a bit like she’s walking about on glass or a sheet of ice. However, I found it fairly easy to adapt to the controls’ response within just a few moments, and it doesn’t require any thought later on. If anything, my only complaint related to the controls is the bugs: Blade Kitten is a somewhat buggy game, more so than I’m used to seeing on a console. Occasionally I’ve gotten stuck in locations that I’ve been unable to free myself from (though it’s really easy to revert back to the last checkpoint, and trust me, there’s plenty of checkpoints). Sometimes you’ll do a “slide maneuver” and Kit won’t come out of it for a few seconds. Worst of all was the time when I jumped off of the Noot I was riding, but the game thought I hadn’t, and after a couple seconds of confusion it completely hard-locked my Xbox. Nothing a reboot didn’t clear up, but wow — I thought I left these kinds of issues behind when I all but gave up PC gaming.

Overall, though, I’ve been having an absolute blast with Blade Kitten. The gameplay is fun, the art is cool, and the voice acting is amusing enough to make it worth suffering the occasional cringe-worthy line. Best of all, the “Hex collecting” plays right into my OCPD — I must collect it all, for completionism’s sake if nothing else, and the almost total lack of ways to get yourself killed by the scenery makes it painless and fun to explore.

This month’s Blade Kitten release is the first of a planned two episodes to be launched on PCs (via Steam, Playstation Network and Xbox Live Arcade. While episode two is in beta testing phase now, today came news that the game’s developer, Australia’s Krome Studios, is likely shutting down as of this coming Monday. Some of the studio’s former employees are reportedly being rehired as contractors to finish up some open projects, and given the state of episode two, it seems likely that Blade Kitten will be one of those projects. But all of this, including the news of Krome’s demise, is still conjecture at this point.

Whether we ever get to see the second episode, I don’t regret my purchase of episode one. If you’re in the mood for a colorful platformer with a quirky sense of humor and a unique and attractive art style, I can heartily recommend Blade Kitten. There’s a demo of the entire first level available on XBLA, and the level’s huge, so there’s plenty of opportunity to figure out whether the game is for you. Or whether you’ll, you know, wind up thinking it’s a mess, like most normal people.

As for me, I’m thinking about checking out the webcomic.

DISCLAIMER: This game has absolutely, positively nothing to do with furries. Thank God.