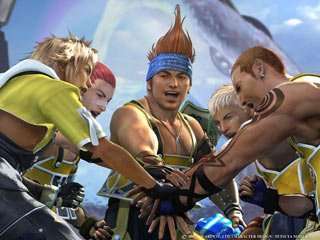 Last night, for the first time, I got pissed off at Final Fantasy X.

It all began with the championship Blitzball game at Luca Stadium. All throughout the beginning of the game, the player is taunted with the concept of Blitzball, a sort of combination of football and basketball that’s played underwater, and was the former professional sport of choice for our main character, Tidus. You keep wondering when you’re going to actually play this Blitzball, and then finally it happens — you’re thrust into the make-or-break game in the finals, and the goal is to bring your team to victory. (Your team, incidentally, sucks so bad that they haven’t made it past the first round in twenty-some years.)

So anyway, after a very lengthy tutorial in which you learn Blitzball strategy and techniques, which is a pretty sizeable minigame in and of itself, you’re thrust into this game with a team full of mostly incompetents, going up against a powerhouse gang of goons on the opposing side. I soon came to realize that statistically, the match-up is nigh impossible. While your team has a couple of good players, the overwhelming majority have no passing accuracy and no endurance to speak of. The opposing team busts through their tackles, shoots goals and basically goes to town, all while you have literally no chance of stopping it because you haven’t even gotten the ball yet, and in defense mode the computer uninterruptably moves all of your players for you so you can’t even try to steal. Then, when you finally get the ball, the opposition triple- or quadruple-teams before you can even pass it, so you’re stuck with some 3-endurance doofus going up against four guys with attack ratings of 12. You can’t break through, you can’t pass and you can’t shoot.

Worse, the computer seems to respond with horrifying slowness to your commands. I eventually realized that “automatic” movement mode on offense was murdering me, so I switched to manual. But even then, there’s a full second delay between when I push the command button and when the command window actually appears, during which some opposing players usually rush me and block me in as usual. I keep trying to pass the ball before I get triple-teamed, but the damn computer won’t let me execute that command until it’s brought the opposition right up in my face!

Honestly, are you supposed to lose this game? From what I gather, you don’t have to win it, and it’s not really even likely that you will, but God — I’d really like to win the damn thing if I could, but nothing is helping. I even found a “cheat the system” strategy online, in which you make certain moves that are so ludicrous, the computer AI basically gets confused and makes a critical error. Not even that worked.

What’s the worst part of all? Each time the game ends up not going my way, I have to reset the PlayStation to load my game and try again. And then I have to sit through over five minutes of un-skippable cinematics and conversation before I can get back into it. I THINK I WILL SCREAM IF I SEE THOSE SCENES AGAIN.

9 thoughts to “Blitzball: An Exercise in Frustration”