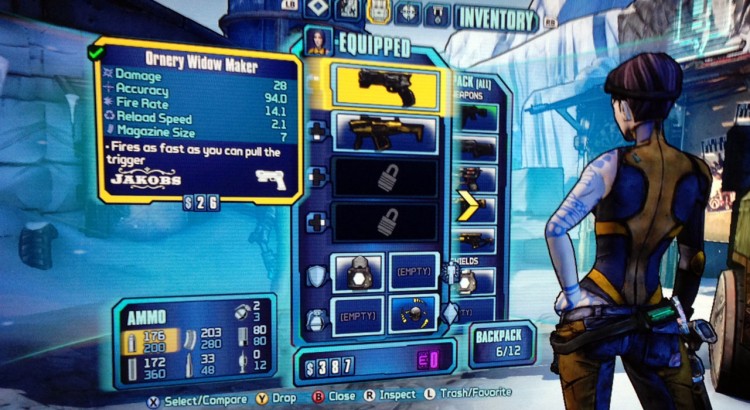 [notice]Face Value is a new Oddball Update feature that takes a brief look at games, gadgets, movies or other media after only a few hours of usage or experience. Similar to a review, but not quite as in-depth.[/notice]

If you’re an old-school shooter fan who thinks he’s seen it all, allow me to introduce you to Borderlands 2. Local video game developer Gearbox Software has outdone themselves with their first follow-up to their 2009 sleeper hit, delivering a game disguised as a non-stop carousel of every action movie trope imaginable. Combining some of the most addictive aspects of modern shooters, RPGs and dungeon crawlers (think: loot farming), Borderlands 2 offers a ridiculous amount of things to do and somehow makes them all incredibly addictive.

There’s a smattering of plot as you make your way through the alien landscapes of the planet Pandora in search of hidden Eridian treasures (and more besides), but it won’t get in your way that often. Mostly the story keeps itself on the fringes, letting you focus on shooting the mother-loving bejeezus out of everything that moves (and some things that don’t) with an arsenal of eleventy-hojillion guns. There are more enemy types than the game has any right to include, gorgeous landscapes and locales done up in Borderlands’ signature cel-shaded style with its inked edges and bright colors, and tons of laugh-out-loud humor. I seriously have not had this much lunatic fun with an action-centric shooter since Doom.

It’s not all run-and-gun, though. Although shooting bandits, alien monsters and robotic combat mechs is entertaining, so are Borderlands 2’s other major mechanics: loot farming and character building. Straight out of those addictive browser games, except without the shifty ethics and lousy microtransaction model, loot collection is where you open up every blessed box, locker, dumpster, chest and garbage can in the entire game, looking for money, ammo, collectibles, health, treasures, and yes, more guns. Seriously, you can open everything and dig through it for sweet loot. Also, save your game and come back later, and all of these containers will be reset for you to rifle through again. What could be better?

The other addictive system, borrowed from the RPG genre, is character building. As you shoot and destroy things, your character ranks up, giving you the ability to spend points on special powers, action skill modifiers and lots more — some of which are truly wacky indeed. Among the more mundane are the abilities to bestow each shot fired with extra damage or increase your chances of doing special elemental-effect damage. But dig further in the skill trees and you’ll find bonuses that let you heal your friends by shooting them. Or deflect all incoming bullets, sending them ricocheting back at your enemies. Or even lockdown enemies in a ball of energy while simultaneously shocking, corroding, burning and slagging them to hell. It’s enough to make you cackle with insane mirth, as you might if you were handed a baseball bat, pointed toward a Lexmark printer and instructed to “have at it.”

Of course, you can’t max out every branch of your character’s skill tree — that would defeat the point. You have to make choices and sacrifices, and if you’re hardcore, even plan ahead. As a bonus, Gearbox knows how obsessive people can be about building up skill tress, so they’ve provided handy character builders on their website where you can map it all out in advance. There’s a separate builder for each of the game’s four playable characters: Axton, Salvador, Zero and Maya.

Character building also goes a step further with the Badass Ranking screen, which is essentially a major upgrade of the original Borderlands’ challenges list. Borderlands 2 is also filled with challenges (many of which have amusing meme-based names, like the very meta “Yo Dawg I Herd You Like Challenges”), but for extra fun, as you complete them you’ll earn Badass Tokens. These tokens can be spent to permanently enhance various abilities of any character you ever build with your particular account (i.e., your Xbox Live Gamertag). This provides even more incentive to get out there and rock those challenges.

And trust me, if you can do something in Borderlands 2, then there’s probably a challenge attached. Kill 10 enemies with explosive damage from Tediore weapons that explode like grenades when you reload them? Yeah, that’s a challenge. Shoot rocks out of midair as the gorilla monsters throw them at you? Yep. Challenge. Find all the missing car keys? Challenge. (Cleverly named, “The Last Place You Look”.) As you’re fighting for your life, the lower left corner of your screen will often be ablaze with messages about challenges you’re completing, even as you don’t mean to be completing them.

More than anything else, though, Borderlands 2 is just too damn much fun. Freewheeling around the world, shooting a zillion types of randomly-generated shotguns, combat rifles, pistols, RPGs, etc…it never seems to get old. The game is challenging — more so than the original Borderlands — but more compelling too, so even when the going gets tough you want to stick with it. And although it’s harder, in my experience it’s never too hard. The excellent “Second Wind” system gives you a chance to cheat death when you’re on your last legs, offering you a full revival if you manage to kill an enemy before the last of your lifeblood leaks onto the floor. “Not my time!” shouted my character triumphantly when, just seconds before death, she took out a raider with a perfect headshot and sprang back into action via a Second Wind. (And yes, there are challenges attached to Second Winds, too!)

Oh…and did I mention that you and three friends can play through the entire campaign cooperatively, just like the first game?

My character has made it to Level 7 so far, and although I’ve only just scratched the surface, Borderlands 2 is without a doubt one of the most entertaining, exciting, compelling, humorous and flat-out fun action shooters available today. Go get it.