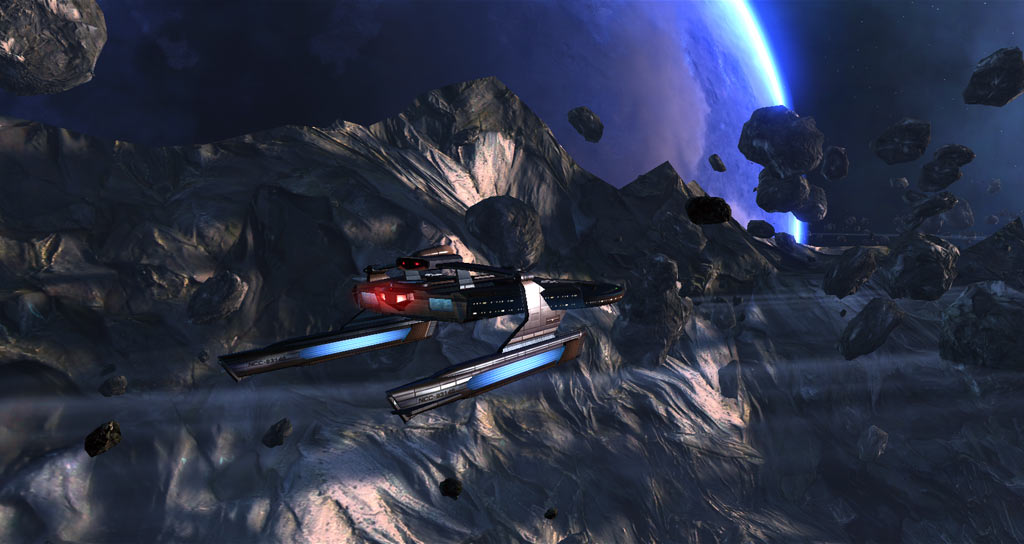 Star Trek and video games. Like many geeks, they’re two of my first loves, forged in my early years when bright colors and awe-inspiring, imagination-stoking stories were all I needed to be truly happy. So it should be no surprise that every time these two elements come together, I sit up and take notice. Usually I find myself underwhelmed, but today I’m positively aglow. And you, dear reader, whether you like it or not, are about to discover why.

For the past week, I’ve been participating in the open beta test of Star Trek Online, the massively multiplayer online role-playing game (MMORPG) from Cryptic Studios, makers of Champions Online and City of Heroes. If those titles don’t exactly inspire confidence, you’re not alone. Maybe, being a hardcore Trekker, I’m more forgiving than most — but it’s my opinion that Cryptic has created something amazing in Star Trek Online, something the cosmos has badly needed for a good number of years: a decent Star Trek video game.

In fact, STO is more than mere decency would imply. In the short couple of weeks since the beta began, I’ve watched it evolve from a rough, buggy and somewhat small-feeling universe to a huge, open-universe game with real polish and real potential — even with the bugs that remain to be fixed. Every Star Trek fan’s dream, whether you like the classic original series, the iconic adventures of Picard’s Enterprise or the dark days of the Dominion War, is represented faithfully by at least one slice of Star Trek Online. It’s enough to make a grown man imitate phaser sound effects while flying his very own replica of the Enterprise about the galaxy.

Because it’s an MMORPG, Star Trek Online is different than your average singleplayer-centric game. It’s a huge open world, a persistent virtual universe that’s constantly running on a farm of servers 24/7, changing and evolving whether you’re part of it or not. You share this game world with all of the other players, who are exploring space, getting into battles and engaging in commerce at the same time you are. Although there aren’t as many opportunities for you to actually play with others as there are in most MMOs, there are still lots of ways to team up and tackle missions, attack the enemy and defend Federation starbases with tons of other people from around the world.

Being a somewhat anti-social person, I’ve never had a real hankering to play popular MMOs like World of Warcraft or EVE Online; usually I would rather explore a game’s virtual universe my myself. Additionally, I was never really a fan of the fantasy setting (dragons, orcs, wizards and so forth) on which most MMOs are based. Star Trek Online therefore presents a unique opportunity for me to enter the world of MMORPGs on my own terms, using a setting both familiar and welcome. And the fact that solo play seems to be rather commonplace — even hard to avoid — in STO only made it easier for me to give it a try.

Knowing that Trekkers are among the most detail-oriented, loyal and catastrophically nitpicky fans in existence, Cryptic has really done their homework. They’ve crafted a backstory set some 50 years after the end of the Deep Space Nine series, in which the peace treaty between the Federation and the Klingons has fallen apart. Seizing the opportunity, species like the Cardassians, the Gorn and the Nausicaans have allied with the Klingons in hopes of claiming or reclaiming their own slices of Federation territory. To make matters worse, third party races like the Borg and the Undine (formerly Species 8472) are entering the fray, and would like nothing better than to eradicate both sides of the Federation/Klingon equation.

You play as a Starfleet ensign thrust into the thick of war on the front lines, and it isn’t long before catastrophic manpower losses conspire to put you in the command chair of your own Starfleet ship. The game chronicles your rise through the ranks as you help the Federation war effort both on the ground and in space, explore new sectors and protect Federation civilians from harm. (And if you’d rather take the other side and play as one of the antagonist races at the helm of a Klingon Bird of Prey or a Cardassian Galor-class warship, you can do that too — although I hear the opposition doesn’t have as rich of an experience awaiting them.)

Every player gets to do what most Trekkers have always wanted: build their own starship. You’ll pick out your ship of choice, customize its appearance and give it the name and registry number (NCC-whatever) that you want; you’ll even get to see them stenciled on the hull in the authentic typeface. While everyone will start out with a light cruiser like the Miranda-class (made famous by the U.S.S. Reliant in Star Trek II: The Wrath of Khan), you’ll later have your choice of cruisers like the Enterprise A, D and E; escorts like Sisko’s Defiant or a science ship like Voyager — plus tons of other ship designs both old and new, familiar and obscure. Fans who preordered at Gamestop get to replace their starter ship with the original series Enterprise, for an extra injection of nerd euphoria.

As you bring your Starfleet career to life, you’ll find a game world that’s full of references, nods and full-on continuations of storylines, lore or even characters and items first made popular by the various Trek TV series and films. You can visit Deep Space Nine, stroll on the promenade or sit at Quark’s bar and order any of the DS9 characters’ favorite drinks. Missions will have you encountering friends, foes or locales from episodes past, like the Doomsday Machine from TOS or the Crystalline Entity from TNG. There’s even a descendant of Lt. Mira Romaine on Memory Alpha, a character from that awful third season TOS episode “The Lights of Zetar” that I thought everyone had forgotten.

Even the little stuff makes me grin and chuckle with satisfaction. Starfleet provisions dealers have stocks of authentic medicines like Masiform D (mentioned offhand by McCoy during a TOS episode). When you engage in battle, the classic red alert klaxon sounds — and no, it never gets old. There’s Saurian brandy, plenty of truly authentic technobabble buffs and abilities, original sound effects straight from the Paramount archives, and even Star Trek themed character emotes like the Picard facepalm, the commbadge slap and the infamous “KHAAAAAAN!”

I would also be remiss if I failed to mention the character creator, which is so incredibly well done that it deserves its own paragraph. When you create your player character, you’ll be presented with a truly staggering array of options that will ensure no two characters look exactly alike. You can choose from a wide range of Trek races like Vulcans, Betazoids and Andorians or even create your own alien species; customize your character’s physical appearance and bestow them with special skills to help you in battle. Last but not least is the uniform editor, where you can outfit your avatar with any of the authentic Starfleet duds from the TOS velour T-shirts to the crimson feature film jackets and all of the TNG/DS9/VOY style variations. The only unfortunate thing is that most of these choices are restricted to those who preordered special versions of the game, of which there are far too many for anyone to get them all without spending obscene amounts of real money.

Star Trek Online is coming up on its street date in the early days of February, so the developers are currently engaged in a frenzied rush to fix bugs and apply as much spit and polish as they can before the general public gets their hands on it. As such, the beta has been going offline for hours every day, usually during the evenings when I want to play. This has been frustrating to say the least, but it’s a testament to how addicting this game is that I’ve stayed up several nights until 3 or 4 in the morning just to get some playtime in. Although there’s no way all of the bugs will be fixed by launch, being an MMO gives Star Trek Online the ability to evolve and improve long after its release date.

So what’s the catch? Everything I’ve said so far has been positive. Of course, like anything, there are problems. Some of the missions are repetitive, ground combat feels clunky and unnatural and there is so much instancing that it’s hard to stay together with your friends even when you’re trying to. The game is only playable on PCs, not consoles, which means I’ve had to re-familiarize myself with video driver problems, loud cooling fans and an uncomfortably hot computer room. And of course, being an MMORPG, Star Trek Online requires that you must pay a $15 monthly subscription fee to keep playing and experiencing its ever-evolving content. Which also means that the game will have a finite lifespan — one day no one will be playing it anymore, which means you won’t be playing it anymore, even if you want to.

Caveats aside, this is one game I feel absolutely no remorse in telling each and every Star Trek fan to check out. Until someone invents the holodeck, it’s the closest you’ll ever come to feeling like you’re a part of the legendary Star Trek continuum. And that’s worth a whole lot of latinum to a geek like me.

This entire entry was written on an iPhone using the WordPress 2.1 application.