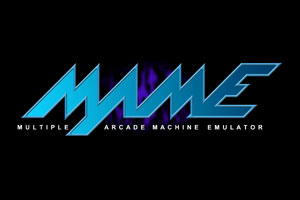 In yesterday’s post, I mentioned that I’m forgoing the Xbox/laptop drag-along this Christmas, and relying only on the computers at my parents’ house for gaming entertainment. Since one of these computers is a three-year-old notebook and the other is an eight-year-old Pentium Pro, I decided that the only games I’m going to be playing were games at least as old as these systems. The obvious answer? MAME, the Multiple Arcade Machine Emulator.

I touched on this yesterday, but didn’t really go into specifics. MAME, simply put, is a miracle. For any kid who ever enjoyed hanging out at the local arcade back in the eighties (or even late seventies), MAME gives you the ability to relive all those memories without requiring the use of a flux capacitor and a DeLorean DMC-12. Sporting a catalog of over 4,600 games, MAME emulates—or pretends to be, in effect—a wide variety of game systems, boards and hardware technologies used by major arcade game manufacturers since the beginning of videogame history. You pair it with dumps of actual software from these ancient arcade cabinets, called ROMs. When MAME loads a ROM, it pretends to be the appropriate arcade cabinet and hardware, so the ROM thinks it’s still parked in a pizza parlor or a mall somewhere and fires right up. So now, in the comfort of your own home, you can play anything from Pac-Man to Cruisin’ World, and it’s all free.

Note that “free” doesn’t necessarily mean “legal”, but then again, creating a KITT replica car and then referring to it as such isn’t technically legal either. But in both cases, nobody’s prosecuting—since, in both cases, nothing currently marketable is being unjustly replicated. (Yeah…like you’re going to be able to buy a new Pac-Man cabinet from the manufacturer today!) So with that aside…it’s game on!

I first got into MAME about a year ago, when I found a fileswapping service offering up the entire 6-gigabyte catalog of ROMs. Back then, MAME was at version 0.60, a milestone release which prompted a re-issue of every game available. (P2P groups do this every ten versions or so, from what I understand.) So I let the downloads crunch away for literally days, and finally, at the end of it all, I had every arcade game I could ever remember playing—plus thousands I’d never even seen, or were meant to see. Many were Japanese-only games, not for export. Others were prototypes of games never finished or released. Still others were bootlegs, hacks of original software made so that some arcade proprietor somewhere could avoid paying the full price for the new machine. The goal for the MAME developers is complete historical accuracy, and for any arcade nostalgia aficionados, it’s almost too good to be true.

With MAME, you won’t need one of these to relive a night at the arcade.

Having selected MAME as my entertainment-of-choice for this year’s Christmas holiday vacation—since God knows there’s going to be some much-appreciated goof-off time—I set about reacquainting myself with how the emulator worked and how to configure the ROMs. It had been almost a year since I’d reformatted my hard drive, after which I hadn’t put back all the MAME stuff. But I had it backed up on ten CD-Rs, so I broke out the spindle and started copying.

Well, a lot has happened to MAME since those days. I downloaded the latest version of MAME32—v0.77—a Windows port of the original command-line software that’s much more visual and easier to use. Only problem is, a few versions ago, some significant upgrades were made to MAME’s emulation capabilities, and this required that new dumps of many supported games be acquired. Thus, several of my favorite old ROMs were not functioning under MAME32 v0.77. Great. So now I had to locate the old version I’d been using last year, v0.66.

That wasn’t easy. For some reason, I found that I hadn’t burned the actual MAME emulator to a CD anywhere. After scouring the ‘net with Google for a while, I located an Italian site that had stored their own local copy of v0.66 back when it first came out—and the file was still on the server. I downloaded and installed it, and all my old favorite games were finally made accessible. Stuff like King of Fighters, Super Sprint and RoadBlasters. Yes!

Which reminds me of some of the…lesser-known games that I apparently have in my possession. Since my catalog exceeds 4,000 sets, when you’re bored it’s fun to scroll down the mile-long list, find a game that looks halfway intriguing, and fire it up. Last night I was doing just that, and discovered some truly…interesting…games. Hardly a surprise, then, that they were all Japanese games (read: no English anywhere) not meant for export.

One of them was like a quiz game—it reminded me of those Japanese dating sims, because there were these anime-style girls standing around and you had to choose one to talk to, and then suddenly she starts asking you questions and it turns into some sort of game show. Since I can’t read Hiragana, I failed. Miserably. Okay, quit that game, let’s find something else.

Located a ROM called “Gals Panic” and, knowing a title like that had to be Japanese in origin, I loaded it. This game, while obviously meant to appeal to the hentai set, was actually pretty entertaining, since it was a concept the likes of which I’d never seen before. Here’s the deal—you get a “board”, sort of like a puzzle, and the image on the board is an anime girl in some provocative pose, or with a lot of cleavage showing, or whatever. But only a very tiny sliver of this image is visible. You have a “game piece” (I don’t know what else to call it) and by holding down button 1 and moving the joystick, you’re supposed to freehand draw—or “cut out”—a portion of the board which will reveal a piece of the image underneath. But there are these dangerous thingies flying around and if they touch you, or the line you’ve been drawing, you’re toast. There are power-ups and other trinkets flying around too, each of which give your gamepiece special bonuses or defensive abilities. You win if you reveal at least 80% of the picture, but I think the idea is to grab the highest percentage of the picture that you can when you cross that 80% line. Gives you bonus points or something. Since it’s all in Japanese, it’s tough to tell. Still, it’s oddly fun for a while.

Rather than bore you by describing any more games, how about something amusing? Since many arcade games are programmed in Japan, and still more of them were never meant for American eyes, there are some games out there with extremely wacky titles. Stuff that, when translated, sounds like a game you wouldn’t want to play ever, or just something nonsensical. Some of these gems include:

I particularly like “Irritating Maze” and “Rip Off.” Bet they made a lot of money on those.

So now that I’ve got MAME32 v0.66 up and running, before we take off for our trip northward I have to figure out which ROMs I’m going to take with me and burn them to CD(s). My goal is to not have more than two CDs of ROMs (uncompressed—I want to be able to just copy them to a hard drive without any dorking around). For older games, this is easy, since they’re small. But just one of the King of Fighters games, for instance, is nearly 100 megabytes.

As for the current version of MAME—v0.77—I am not downloading all of those ROMs again to get copies that work on the new version. Fortunately, I don’t have to. From now on, I’ll probably use a service like Free MAME Roms. This is a group of MAME fanatics and collectors who, if you send them a small amount of cash or blank media, will burn you an entire library of every MAME ROM there is, plus original cabinet artwork, flyers, sound samples, screenshots, and the whole works. Usually this costs around $25-$30. Better than wasting a week downloading gigabytes upon gigabytes of shit, then having Comcast cancel your stupid cable connection for “abuse!”

Well, no matter which games I bring along, this is going to be a nostalgic holiday all around. Old favorite friends, places, restaurants, sights and sounds…and games too. Oh! We’ve got to go to the Awrey factory and buy DOUGHNUTS! And cake…and date cookies…and lots of stuff to gorge yourself with and love every minute of it. Go Go! Doughnut Mile!